Ghost Bullet Range (aka Blood on the Saddle) 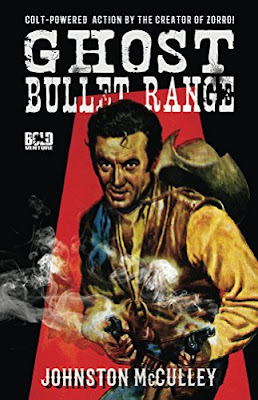 One of the most collectible pulp magazines of all time is the August 9, 1919 issue of All-Story Weekly. This publication featured the first of a five-part series called "The Curse of Capistrano". It was the first appearance of the wildly popular western hero known as Zorro. The character and story were created by Johnston McCulley (1883-1958), a World War I veteran from Ottawa, Illinois. Not only did McCulley create Zorro, but he excelled in the pulps by creating characters like The Crimson Clown, The Green Ghost and Black Star. Additionally, McCulley wrote hundreds of short stories and novelettes including Ghost Bullet Range. This novel first appeared in the September, 1942 issue of West. In 1944, Avon released the book as a paperback titled Blood on the Saddle. The book is now available in both softback and ebook version through Florida independent publisher Bold Venture Press.

Ghost Bullet Range features an experienced and highly respected trail boss named Phil Banniton. When readers first meet Banniton, he's in a firefight on the Kansas plains just outside of Dodge City. The fight stems from a quarrel the prior night over beer, poker and a gallon of testosterone. After Banniton won some money off of Sid Boyd, he becomes a target on the range. This gunfight is just an introduction to Banniton to insure readers that he's of the “admirable white-hat traditional western hero” variety.

Later, one of Banniton's old friends shows up with a message. The Diamond W ranch, owned by Andy Walsh, is being bullied by a nest of land baron vipers. Banniton's reaction to this emotional message is mixed. Walsh raised Banniton and had groomed him as the ranch's successor. But the two had a falling out and Banniton resigned his position at the ranch. Banniton not only severed ties with Walsh, but also extinguished the romantic relationship he was having with Walsh's daughter Ella. Banniton still feels a sense of obligation to Walsh. Additionally, one of Banniton's best friends was murdered on the ranch. These emotions all play a part in Banniton's participation to defend the Diamond W.

McCulley's narrative moves at a brisk pace and is loaded with nonstop action. Banniton's investigation into who is killing off the Diamond W ranch hands is an interesting part of the story. As the body count grows, the only clue seems to be the vague words "spotted steer" that is often whispered by dying men. The trouble comes in waves as Banniton faces this mysterious killer, a rival ranch and a nemesis that's pressuring Walsh to sell the ranch cheaply.

There's nothing to really dislike about Ghost Bullet Range. As an early 20th century western, it contains all of the likable aspects of the genre - noble hero, savage range war, damsel in distress and the evil rival rancher. The spotted steer clue resulted in a rather disappointing revelation, but this wasn't a deal breaker. McCulley's propulsive pace placed these characters in many different locations throughout the story. As a reader, I never found myself confined to a saloon, ranch, prairie or house. The action is a spread out to deliver a more epic presentation.

If you like classic westerns, Ghost Bullet Range is sure to please. Buy a copy of the book and support independent publishing HERE.