Hold Back the Sun 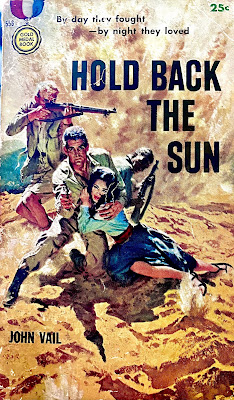 Robert Carse (1904-1971) was a New Yorker who worked as a merchant seaman before becoming a writer and novelist. In the 1920s, he used his experiences at sea to write a number of adventure tales for the pulps. Under his own name he wrote historical and nautical fiction. He also contributed to the romance genre with books like  The Flesh and the Flame (1960), Cage of Love (1960) and End to Innocence (1964) for Monarch. Perhaps his best-known literary work was written under the pen name of John Vail. It is this name that is featured on his Fawcett Gold Medal paperbacks The Sword in His Hand (1953), The Dark Throne (1954), Blond Savage (1955) and Sow the Wild Wind (1954). My first experience with the author is his Fawcett Gold Medal novel, Hold Back the Sun, originally published in 1956 with a cover by poster artist Frank McCarthy.

Hank Gatch and his team are smugglers. Using Gatch's 83-foot ship The Soledad, his illegal operation ships goods between the coast of France and North Africa. His reputation as an experienced smuggler is what appeals to a young Israeli named Yevna. Her horrifying experiences at the Auschwitz concentration camp motivated her to defend Israel from the Muslim Brotherhood. Along with her brother, she's aiding resistance and freedom fighters with firepower. She hires Gatch to help her negotiate with an arms dealer to acquire a stash of weapons.

Carse's narrative is constructed around Gatch's team running and gunning around North Africa in an attempt to avoid port authorities and the Brotherhood. Beyond the initial job, Gatch is employed by Yevna's brother to secure another large shipment of firearms on a coastal reef. Along the way, Gatch and Yevna fall in love.

Hold Back the Sun is just an average read. There's nothing terribly exciting about the story, but it is written well enough to please most readers. I found that the narrative was really just connecting map dots as the team traveled to each destination performing tasks. The romantic chemistry between the two main characters was Carse's main interest, evident from Fawcett's front cover: "By day they fought, by night they loved." From a nautical fiction stance, the technical aspects reminded me of another, much better Fawcett Gold Medal paperback - 1968's A Great Day for Dying by Jack Dillon.

At just 140 pages, Hold Back the Sun is a satisfactory read, but just manage your expectations. Despite the alluring cover art, the story is a little stale.