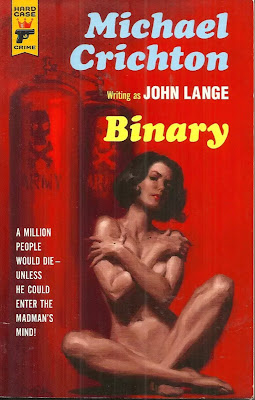 Before he became one of the bestselling authors on Earth, Michael Crichton (1942-2008) was a medical student writing short paperback thrillers under the name John Lange. The good people at Hard Case Crime landed the reprint rights to his early works and repackaged them with their trademark alluring covers. Binary was a 1972 beat-the-clock domestic terrorism thriller and Crichton’s final novel using the Lange name.

The book begins with a daring heist of two canisters of deadly nerve gas ingredients being transported on a U.S. Government train through Utah. The heist crew is mafia guns-for-hire who are unsure exactly what they are stealing or for whom. The theft happens directly before the kick-off of the Republican National Convention in San Diego, and astute paperback original readers will quickly come to the conclusion that the timing of this heist was probably no coincidence.

We then meet U.S. State Department Intelligence Bureau Special Agent John Graves, who will be playing the role of Jack Bauer on this Very Special Episode of 24. He’s a polymath genius who is conveniently good at everything. Graves is the case agent in the investigation of a politically-radical billionaire named John Wright, who is clearly up to no good. Graves tails Wright as he purchases empty scuba tanks and other stuff that might help in weaponizing stolen nerve gas components. Before the heist, the routing and the contents of the train were obtained by a computer-hacker-for-hire who admits under questioning that Wright paid him for the information. Even more nerve-wracking, Wright also paid for the hacker to obtain Graves’ government personnel file. Has the hunter become the hunted?

The idea of "Binary” things carries a lot of weight as a metaphor in the paperback. The gas, posing the central threat of the book is inert unless mixed with a complementary gas to form the nightmarish chemical weapon. Meanwhile, the two Johns - Graves the hero and Wright the villain - are also two sides of the same coin. Both are highly-intelligent chess and poker enthusiasts squaring off in a battle of wits with millions of lives in the balance.

Binary is an exciting and simple paperback that ticks down the minutes over a rather short period of time with little opportunity to ever get boring. Is it a masterpiece of the genre? Hell, no. It’s about as good as the post-Pendleton Executioner books of the 1970s. Moreover, the novel has plot holes you could drive a freight train through, but why quibble? It’s a blast to read if you’re looking to kill a couple hours. If this is your kind of thing, you’ll like this one just fine.