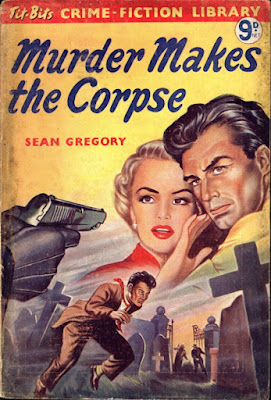 The history of this paperback and publisher are nearly as interesting than the book itself. Bear with me - we’ll get to the review shortly.

The short novel was printed by a British publication called Tit-Bits (quit your snickering), a publication that ran from 1881 to 1984. The magazine’s specialty was human-interest stories, and some issues featured short stories or even short novels in their entirety. H. Rider Haggart and Isaac Asimov were both published in Tit-Bits.

Unfortunately, I’ve been unable to definitively confirm whether Murder Comes Easily and Murder Makes Mockery were actually part of the same series starring his recurring character. But, based on the titles and the clustered publication years, it seems likely.

The known paperbacks feature a crime-solving Hollywood agent named Mack Regan, and they’re hard as hell to find today. The good news is that one of the 1954 confirmed books in the series, Murder Makes the Corpse, has been reprinted as the B-Side of a trade paperback double from Armchair Fiction along with Mike Brett’s Scream Street.

Our narrator is Mack Regan, a Hollywood Press Agent (today, we’d call him a publicist) who receives a call from a TV singer named Kay Ransome seeking to engage Mack’s services. Before the new client meeting takes place, Mack learns that Kay was shot to death in her apartment - a bad deal for Mack since he never got paid by this would-be new client.

Soon thereafter, Mack is visited in his office by Kay’s kid sister Lynn, who is understandably upset about her sister’s murder. According to Lynn, Kay was  in some kind of trouble and frightened for her life. Now Lynn wants to engage Mack to investigate Kay’s murder for the lofty sum of $300. None of this makes much sense - to Mack or the reader - because Mack is a Hollywood press agent not a private detective. As such, he urges the grieving girl to save her money and let the police handle the murder investigation.

Lynn later informs Mack that her dead sister was apparently mixed up - sexually, that is - with a San Francisco racketeer under investigation for tax evasion. It appears likely that Kay has stashed away some of the mobster’s hidden money in her own safe deposit box. Against his initial judgement, Mack agrees to help Lynn solve Kay’s murder despite the high likelihood of Mack getting sideways with a well-resourced underworld figure.

Meanwhile, we also learn that the police are investigating a series of grave robberies over the past year. Dig this: Someone has been stealing entire dead bodies from caskets buried in the ground. Not cool. This all coincides with Mack taking on a funeral home and cemetery as a new client in search of publicity in exchange for a lofty retainer of $100 per week.

Eventually, the three plot threads - Kay’s murder, the cemetary publicity gig, and the grave robberies - are shuffled together to form one full deck of a plot. Mack is a great main character - funny, competent, and charismatic. He’s got a steady girlfriend, so he spends zero pages trying to get laid - unusual for a 1950s crime paperback. Also unusual: the hardest beverage Mack drinks is orange juice.

The most amazing thing about Murder Makes the Corpse is the author’s economical writing style. A lot happens over the course of the 63-page novel, and not a word is wasted along the way. It was a popular gambit in the 1950s for foreigners to write mysteries set in the glamorous USA (Carter Brown and Larry Kent among them), and this one carries it off with only a few accidental U.K. references.

This is a charming mystery with some original elements and a main character you want to accompany on more adventures. Unfortunately, that will be an expensive project given the scarcity of surviving Tit-Bits novels. We should all be thankful that Armchair Fiction has reprinted Murder Makes the Corpse as it was a lot of fun to read. Recommended.