Toll for the Brave 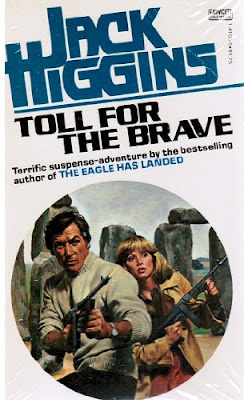 Before Jack Higgins (real name: Harry Patterson, born 1929) became a massive bestselling author of thick, high-adventure novels, he wrote exciting 180-page paperbacks for guys like us. Case in point: His 29th novel, Toll for the Brave (1971), which remains in print today.

The protagonist and narrator is Ellis Jackson, a British citizen who enlists in the U.S. Army to fight in the Vietnam War as a paratrooper in 1966. Evidently this was a real thing - highly unusual - but it happened. Despite serving with valor, he is captured by the Viet Cong and thrown into a tortuous prisoner-of-war camp administered by the sadistic Chinese. This segment of the paperback was vivid, violent and compelling as Ellis is brought to the physical and the psychological breaking point.

Inside the camp, an African-American U.S. Army Brigadier General with a fantastic backstory named Max Sinclair is also housed as a prisoner of war. Black Max, as he was called, was a U.S. military legend who fought in World War 2, Korea, and now Vietnam where he was caught by the commies while venturing beyond the confines of his command post. Black Max teaches young Ellis how to handle the confinement and torture with a Zen equanimity that preserves Ellis’ sanity and life. Meanwhile, a sexy Chinese psychologist at the camp named Madame Ny is assigned to be Ellis’ chief interrogator while using sensuality and mental manipulation to break the young Britton down. The POW camp scenes comprising the book’s first act were among the best I’ve read this year.

Eventually, Ellis wins his freedom and begins a new life in a marshy village 50-miles outside of London called Foulness. This setting change comprises a new section of the novel, and Ellis is dealing with what appears to be severe PTSD. It’s so bad that when he goes to walk his dog, he thinks he sees Viet Cong lurking in the swamp trying to kill his pet. It’s during one of these dreamlike episodes that a suspicious murder occurs (the novel’s back-cover spoils it, but I won’t), and it’s then incumbent upon Ellis to prove his own innocence and solve the murder. The innocent man being forced to solve a murder to clear his own name has got to be the plot of darn near half the novels we review here at Paperback Warrior. To his credit, Higgins does a good job with this tired storyline, but it has nowhere near the edge-of-your-seat emotional impact of the POW camp scenes.

There are plenty of great action sequences that will please readers - including some particularly well-crafted martial arts fights. The climactic ending has a giant twist you won’t see coming, but that comes with a cost. The “solution” to the novel’s central mystery is truly moronic and illogical. It’s safe to say that the paperback’s resolution would only please fans who have received frontal lobotomies. Can you enjoy a good book with a bad ending?  That’s the real question here. Is it the ride or the destination that matters? It’s your call.