The Land God Gave to Cain 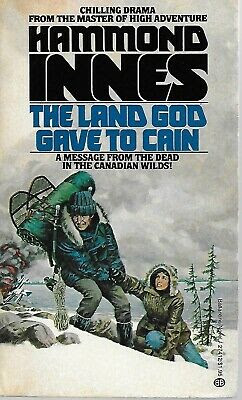 British adventure author Hammond Innes had a very specific writing ritual. He spent six months researching a location and then six months writing a novel that takes place in or around that vicinity. For his mid-career effort, The Land God Gave to Cain (1958), he traveled to Labrador, a cold region in Canada's northeastern region of Newfoundland. Innes visited the area extensively in 1953, but then traveled there again for his novel. Innes stated that on his first journey to Labrador, he traveled nearly 400 miles into the rugged interior, living in primitive railroad construction camps. He used trains, track motors, trucks, float planes, and helicopters to see the full scope of this majestic area. Eventually, he even roughed the area on foot.

The travels that Innes made into the Labrador interior parallel those that young Ian Ferguson makes in the third act of The Land God Gave to Cain. By having first hand experience in this area prior to the commencement of full rail travel, Innes paints a realistic picture for readers. Innes places Ferguson and readers into the wild, into flatlands brimming with ice and dotted by hundreds of lakes and rivers between forests of muskeg trees. But oddly, the story begins in suburban London with a simple radio broadcast.

Engineer Ian Ferguson has returned home to London after receiving word that his father, James, has died. James lost the use of his legs during WW1. Confined to a chair, James visited the outside world through Ham radio. When Ian arrives at his father's house, he finds James' bedroom filled with maps and notes about Labrador, Canada. After studying the radio log, he finds that his father died upon hearing a radio broadcast from Labrador. What was this mysterious message?

Ian discovers that his father was tracking a small group of scouts in northeastern Canada. These journeymen would relay their coordinates by radio at various outposts and camps. James simply wrote them all down. Using a map, their trek through the wilderness was something James felt a part of, even when faced with paralysis 15,000 miles away. But, the men disappeared and after days of searching, only one made it out of the wilderness, a French-Canadian man named Laroche. He reported that the rest of the party died in a plane crash or succumbed quickly to the elements. But, days after Laroche's account to authorities, James received a radio broadcast from one of the men Laroche claimed was dead. This broadcast was sent in the dead of night from an aircraft radio in the Labrador interior. Was it a distress call from a dead man?

Because of the importance these men, and mission, had with his father, Ian begins to unravel the mystery. But, the Canadian authorities are quick to resist and claim that Laroche is telling the truth and that there are no signs or indications that anyone else survived. Further, they claim it is physically impossible that Ian's father could have received this distress call from the plane's shortwave radio. First, the plane supposedly sank in an unknown lake. Second, the radio's distance would be just a few hundred miles, not thousands of miles halfway across the globe.

With raw determination and a hunch, Ian travels to Labrador to interview Laroche and learn details about the group's crash. From there, Hammond Innes injects loads of mystery, intrigue and history into the novel's second act. Ian's quest for clues leads to a lot of questions. Additionally, Ian learns that his father had a very good reason for being so interested in this area of Canadian wilderness. The novel's third act is a thrilling pursuit to solve the riddle.

The fact that Innes keeps readers in the dark for two-thirds of the book is clever, but antagonizing at the same time. I loved the mystery and what Innes forced me to do as a reader - follow the same clues provided to Ian and form a hypothesis on what this whole thing actually means. But, on the other hand, I was often angry because the supporting characters were so vague and aloof. I wanted instant gratification. I demanded instant entertainment. But, this was 1958 and Innes forced me to be patient and work for it.

If you love high-adventure novels set in exotic locations, The Land God Gave to Cain is sure to please you. It has a core mystery, a perceptive protagonist, an obstacle to overcome and an appetite for thrilling adventure. Also, it's a frosty novel in the vein of John Broxholme, Desmond Bagley and Alistair MacLean. If that isn't an invitation, I don't know what is. Just read the book.