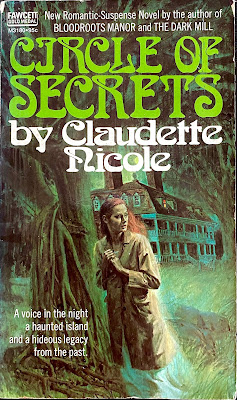 Jon Messman proved to be a prolific and diverse author throughout the 1970s and 1980s. He created the wildly successful The Trailsman series of adult westerns, contributed installments in the Nick Carter: Killmaster spy series as well as authoring his Handyman and Revenger series of men's action adventure novels. Messman also wrote horror and stand-alone thrillers, but surprisingly, he also authored gothic romance novels under the pseudonyms Claudette Nicole and Pamela Windsor. After reading a lot of Messman's work, I decided to try one of his Nicole gothics, Circle of Secrets. It was published by Fawcett Gold Medal in 1972.

Kim Morrison and Mary Ellen met and became friends in college. Years later, the two still remain long distance friends and communicate through letters and phone calls. Oddly, Mary Ellen only talks to Kim after midnight and maintains a bit of secrecy concerning her personal life. On their most recent phone call, Mary Ellen seemed distressed, motivating Kim to pack her bags to make a visit. The next day, Kim receives the deed to Mary Ellen's house, a beautiful old plantation home off the coast of Georgia. The property, known as Starset, has been passed down from generation to generation, and apparently Kim is the new owner. But, what's going on with Mary Ellen?

Kim's visit to Georgia is plagued with issues. She receives an ominous telephone call warning her to stay away from Starset. Within a few miles of Starset, someone shoots Kim's tire. Further, there are multiple attempts to murder her using things like rattlesnakes and faulty stairs. Kim discovers that Starset has remained empty for years and there is no sign that Mary Ellen has recently lived in this house. After further investigation, Kim discovers an old gravestone on the property...and Mary Ellen's name is on it. Mary Ellen has been dead for three years! Has Kim been communicating with a ghost this whole time!?!

Circle of Secrets is a more of a murder mystery than a gothic. Traditionally, these gothic novels describe the house in so much detail that they become a character. In those books, most of the suspense and intrigue occur inside the walls of the lavish mansion or castle. Messman still includes the mansion (and vulnerable woman), but he places most of the mystery outside of the house. Like a toned down detective novel, Kim interviews the minister, coroner and town residents about Mary Ellen's mysterious death. Slowly, the book evolves from the ghostly tease to a flat-out crime-noir mystery. However, Messman rips the rug out from under the whole thing on the very last pages. It becomes a frustrating open-ended finale where readers can draw their own conclusions on who, or what, is terrorizing Kim.

If you can purchase a copy of Circle of Secrets on the cheap, then I recommend it. It's a murder mystery cloaked by gothic drapery with great artwork and colors. Additionally, Messman is such a great writer that even this average read is enhanced by his storytelling magic.