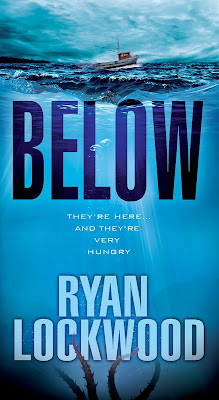 According to his bio, Ryan Lockwood holds degrees in technical journalism, environmental science, and has been employed as a biological research assistant and professional editor. In 2013, he authored the first of two books starring a marine biologist named Valerie Martell – Below (2013 Pinnacle) and What Lurks Beneath (2015 Pinnacle). Living a mere 15-minutes from the ocean, I'm always looking to dive into a good aquatic horror novel.

Below contains everything you want from the typical Pinnacle action novel. Roguish male hero, the seasoned good guy cop, plenty of killing and a few high-energy chase sequences. Oh, and the inevitable booming of explosions. By the book's halfway point, one would never fathom that the hero is a woman. It's Pinnacle after all...with decades of male-led heroism.

In the book's first half, the capable hero is Will Sturman. He grew up in the rugged Rocky mountains, joined the military and now makes a meager living as a professional diving instructor on the southern California coast. In the book's opening chapters, Sturman is underwater instructing a semi-experienced group of divers when there's nearly a casualty. One of the women becomes tangled in an old boat resting on the seabed. These introductory chapters are a frantic grasp for air as Sturman rescues the woman from the clutches of death. Later, readers learn that Sturman is suffering the loss of his wife by staying drunk and shooting pool at his favorite bar. His ex-military buddy, Joe Montoya, is the town constable.

But, this is an underwater horror novel and soon the body count starts to rise as divers and fishermen are devoured (more like sucked apart) by enormous Humboldt squid. Sturman is eventually led to an expert on these unique predators, Valerie Martell. Together, Sturman, Montoya and Martell become unlikely opponents to hundreds of people-eating-squid-monsters. Surprisingly, it's not as preposterous as it sounds. Humboldt are terrifying and have been known to attack deep sea divers outside of the pages of a fictional aquatic horror paperback. They are the real deal.

By the book's furious finale, Martell becomes the hero. In fact, Sturman is sort of cowardly and abandons the whole mission for most of the third act (although he does save the day). I thought the transition into this new Pinnacle hero was well played with Martell becoming this fierce and determined leader facing overwhelming adversity.

With underwater fights, creepy and ferocious “monsters”, a high body count, sea chases and heroic camaraderie, there's plenty in Below to keep you afloat.