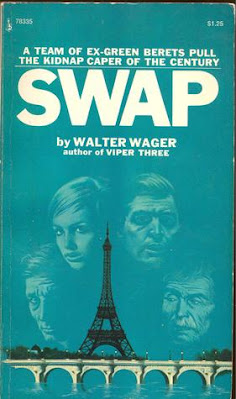 Walter Wager (1924-2004) was an American author of espionage, crime, and adventure fiction. He penned the books inspiring the movies Telefon and Die Hard 2. Under the name John Tiger, he also wrote several media tie-in novels for Mission Impossible and I Spy. His stand-alone 1972 novel Swap was a Cold War espionage heist adventure of the Vietnam war era.

The action opens in combat where American super-soldier David Garrison is 28 days away from the end of his tour in Vietnam. Garrison is a jungle fighter, parachutist, sabotage expert, and ambush maven. He’s like Rambo on steroids (make that additional steroids). Unfortunately, Garrison’s luck runs out when an enemy grenade detonates near him in the ‘Nam forest making his whole world go black.

Fortunately - for the sake of the novel - killing Garrison isn’t that easy. He is airlifted to safety - blind, mute, disfigured and paralyzed - where a U.S. Army brain surgeon named Dr. Bruce Brodsky saves Garrison’s life and mind. Garrison learns that Dr. Brodsky is “at war with war...he wants to kill death with a scalpel...it’s a personal feud.” In any case, Garrison’s war in Vietnam is over. He’s flown to Walter Reed Hospital in Washington, DC, where a plastic surgeon gives him a new face - just like Parker, Drake, Bolan and dozens of other men’s adventure paperback heroes.

Garrison owes his life to Dr. Brosky and seeks out the miracle medic to thank him. After tracking him down, Garrison offers him a favor - anything the surgeon wants. After some cajoling, it turns out that Dr. Brodsky actually does need help. The doctor’s grandfather is a department store tycoon in his 80s who is dying of cancer. Before the old man dies, he wants his 14 year-old great-grand-niece rescued from a Russian orphanage and brought to America to live in freedom. The problem is that back in 1972, the Soviets weren’t enthusiastic about shipping teenage orphans to capitalist America. The old man is willing to pay Garrison $250,000 to snatch the girl from her orphanage and transport her to the USA. Out of loyalty to Dr. Brodsky, Garrison accepts this impossible mission.

En route to the Soviet Union, Garrison stops in Athens and Israel and is able to dispatch terrorist plots in both countries. Once in Moscow, the difficulty of the mission becomes centralized. Grabbing a kid from a Soviet orphanage is harder than you might think. As Garrison’s plan evolves, Swap becomes a team-based heist novel featuring the obligatory Apache soldier, Georgia hillbilly, Israeli killing machine, and sexy babe. Think of them like a smarter, better-written Phoenix Force.

Beyond that, I don't want to give much else away other than to say that this book is so, so good. Wager’s writing is never flashy, and the action moves forward in a compelling, linear fashion. There are great twists and turns along the way and vivid characters who make you want to cheer and jeer. Wager successfully merges the combat, heist, and espionage genres into one, nearly-perfect paperback.

Many of Wager’s novels have been digitized and reprinted over the past few years, but Swap has yet to be rediscovered by any of the reprint houses. This is a glaring oversight because the novel is simply awesome and will appeal to fans of early Nelson DeMille or classic Alistair MacLean high adventure. Whatever it takes, your mission is to drop everything and get yourself a copy of Swap. Highest recommendation.