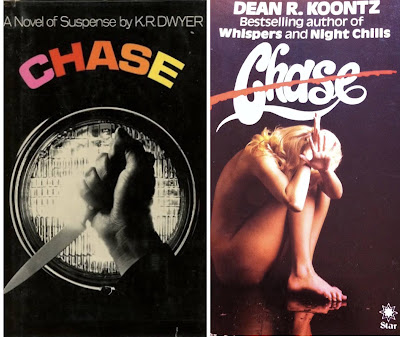 Using the pseudonym K.R. Dwyer, future horror-fiction superstar Dean Koontz wrote his first suspense novel, Chase (1971), when he was 25 years old. It’s a stalker-serial killer, cat-and-mouse book with no supernatural elements. In 1995, Koontz overhauled and re-released the book for modern audiences to enjoy under his own name.

Our hero is 25 year-old Ben Chase, a legitimate hero freshly returned from Vietnam where an act of bravery won him the Congressional Medal of Honor and made him a local celebrity in his suburban hometown. However, Ben wants nothing to do with fame or awards. He is suffering from severe PTSD and prefers to spend his time in isolation, locked in his rented room drinking whiskey and watching old movies.

One evening, Ben drives his Mustang alone to ruminate at the local lovers lane where teens are copulating in their cars. Ben spots a creepy stalker lurking in the woods watching the teens get busy. Eventually the stalker rips open the door to a vehicle and attacks a teen couple inside with a knife. Ben snaps into action and grabs the stalker in a choke hold. Unfortunately, the stalker killed one of the teens and traumatized the other, and Ben sustains a knife wound that allows the maniac to escape the scene. No one, including Ben, was able to get a good look at the stalker.

Ben’s most recent act of heroism catapults him to the front pages of the local newspaper again as a local hero when all the young vet wants is to be left alone. This leads to Ben receiving phone calls at home from the stalker who explains his motives and tells Ben he’s a marked man. The authorities are no help, so Ben must decide if he wants to wait for the stalker to attack or go on the offensive to eliminate this shadowy enemy.

Having read many of Koontz’s horror novels when he was at the top of his game in the 1980s, it’s cool to read one of his early works. Chase is a pretty basic suspense novel, but it’s also an important rumination on the psychological costs of war and the way we treated our vets returning from Vietnam. The reader cares about Ben’s physical and mental well-being and quickly becomes invested in his success as he matches wits and might against the stalker through the novel’s nightmarish, violent and climactic conclusion.

Chase is a quick read - practically a novella. Koontz eliminated about 25% of the fat from the original K.R. Dwyer manuscript and overhauled the dialog for the 1995 re-release available today. As such, it’s a completely fat-free reading experience, and a pretty great page-turner. It’s admittedly a pretty formulaic suspense story, but it’s a formula that has always worked for me and an easy recommendation for you. Check it out.