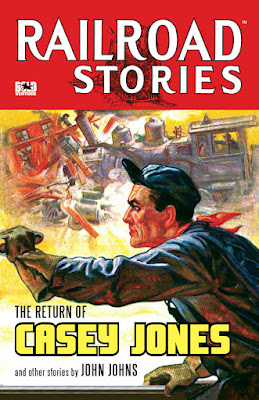 As early as the 1800s, stories about the railroad industry have been a popular staple in pop culture. Those in need of an escape from everyday boredom often gravitated to the rails at the turn of the 20th century. The hobo lifestyle of seeing the country by riding the boxcars was a prevalent one, eventually becoming ingrained into the mainstream through songs, films and books. The most prominent magazine of railroad fiction was Railroad Stories. It was the first specialized pulp magazine to offer these types of stories and featured a variety of authors applying their expertise.

Under license from White River Productions, Florida's Bold Venture Press has been publishing stellar collections of these vintage railroad stories for modern readers. Beginning in 2015, they began publishing trade paperbacks collecting stories culled from Railroad Stories and other magazines. Each of these volumes, mostly feature author E.S. Dellinger, but Vol. 4 is A. Leslie Scott, Vol. 7 is John Johns, Vol. 8 is Norman Brandhorst, and Vol. 10 is Don Waters. My first ride on the rails is Vol. 7: The Return of Casey Jones. It was published in 2019 and features five stories that have never appeared in paperback until now.

The book's lead story is “The Return of Casey Jones”, authored by John Johns and originally published in the April 1933 issue of Railroad Stories. The story begins with a young schoolboy named Jim Martin learning about the tragic death of his idol, the famed engineer Casey Jones. Years later, Jim's father dies and he is left to tend to his ailing mother. Jim is an engineer for the The Chicago, Milwaukee, St. Paul and Pacific Railroad (CMStP&P). Like his idol, Jim is known as a fast runner and can make up time between meets.

A lot of Jim's railroad buddies sign up for early action in World War 1. Jim is anxious to join the fight and use his engineering skills for his country. But, the doctors suggest that if Jim joins the military his mother may suffer another stroke. To protect her, he chooses not to enlist, which infuriates his peers. To complicate things further, Jim experiences a terrible train crash and is thrown from his cab. Suspecting that he jumped from his engine instead of holding tight, the town immediately ridiculed him for being a coward. He's disowned by his girlfriend and his railroad crew. But, after another freak accident, Jim has the ability to prove the town wrong. Thus, "The Return of Casey Jones" is a story of redemption.

I really enjoyed this 70-page novella and found myself cheering Jim as his mountain of misfortune began a seismic shift. There were some technical aspects that I struggled with, but it didn't detract from the story. Jim's adversity and clash with the military and his town was engaging, and thankfully ended on a good note. In terms of action, the book recounts the story of Casey Jones, adding more action to Johns' narrative.

This story was also released as a film in 1935 by Monogram. This collection features a short article by Bold Venture Press co-owner/editor Rich Harvey about the film as well as information on the its star, Charles Starrett.

Other John Johns stories in this collection are: