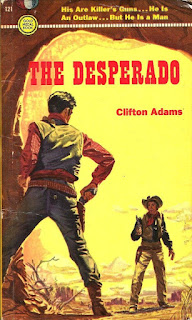 Clifton Adams was a wine connoisseur that loved jazz music and Oklahoma history. He also wrote a bunch of violent, gritty novels about heroes and outlaws. He won two coveted Spur Awards and was admired by many of his contemporaries. Popular crime-noir author Donald Westlake cited Adams as an influence on his beloved Parker series of heist novels. We've reviewed many of Clifton Adams' novels and we hope today's Paperback Warrior Primer will prompt you to explore his robust bibliography.

Clifton Adams was born in Comanche, Oklahoma in 1919. He began writing at an early age. However, his writing development paused when he joined Hell on Wheels, officially known as the U.S. Army's Second Armored Division. During WW2 he served as a tank commander in both Africa and Europe.

After WW2, he utilized the G.I. Bill to attend University of Oklahoma to study professional writing - a degree that focused on making a living as a writer. It was there that he won the “Oklahoma Writer of the Year” award. In his acceptance speech he said, “There’s only one way to approach the kind of writing I do - and that’s as a business. I’m not selling art. I’m selling entertainment.”

And with that idea as his North Star, he succeeded. In his career, he wrote 50 full-length novels and 125 short stories the magazines and digests. His first professional sale was the short story "Champions Wear Purple", published in Adventure in January 1947. His first novel, Desperado, is often cited as his finest work. It was originally released as a Fawcett Gold Medal paperback in 1950. It was a monster hit and spawned a sequel in 1953 called A Noose for the Desperado. Both books remain available as reprints from Stark House Press. 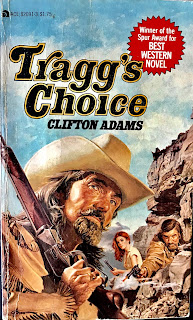 Besides the two Desperado books, his only other recurring character was Amos Flagg, a western series written under the pseudonym of Clay Randal. The series ran from 1964 to 1969 for seven installments. He also wrote five stand-alone novels under the Clay Randal name between 1953 and 1963. He also wrote six westerns between 1958 and 1963 under the name of Matt Kinkaid. Celebrating his western writing, he won two Spur Awards from the Western Writers of America - 1969 for Tragg’s Choice and 1970 for The Last Days of Wolf Garnett.

While most of his literary work falls into the western genre, he also wrote crime-fiction. Whom Gods Destroy and Death's Sweet Song were both published in 1953 by Fawcett Gold Medal. His 1956 crime-noir, Never Say No to a Killer, was published by Ace under the pseudonym Jonathan Gant. All three of these books have been reprinted by Stark House Press. He also used the Gant name to author The Long Vendetta, published in 1963 by Avalon. Under the name Nick Hudson he authored The Very Wicked, published in 1960 by Berkley.

Clifton Adams died from a heart attack in 1971 in Comanche, Oklahoma. According to our research, the author's papers are kept at the American Heritage Center at the University of Wyoming. For more information, listen to the Paperback Warrior Podcast episode about Clifton Adams HERE.