The Girl from Addis 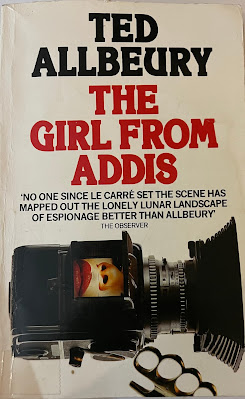 Ted Allbeury (1917-2005) served as a U.K. Intel officer from 1940 to 1947. During WW2, he infiltrated Nazi Germany via parachute and later was caught - and tortured by commies - smuggling spies between East and West Germany. He began writing espionage fiction with a heavy dose of realism at age 55 and went on to publish 40 novels in the genre. My introduction to his work was his 1984 stand-alone paperback, The Girl from Addis.

The story is narrated by our hero, Johnny Grant, a British MI6 operative during WW 2. Back in 1941, Johnny was stationed in the Ethiopian capital of Addis Ababa. The country had just been liberated from Italian rule and the Ethiopians were organizing themselves as a nation under the leadership of their own emperor. The Brits were providing transitional help to the emperor, and Johnny was serving as the chief’s British Military Liaison. Of course, what he was really doing was spying. His main target was a wealthy Armenian named Jonnet who was supplying the Japanese with fuel and arms during the war. Before he could get the job done, Johnny’s cover is blown and he has 48 hours to leave Ethiopia or be killed.

Anyway, that’s the background. Johnny left MI6 in 1947 and embarked on a far more interesting career as a photographer of swimsuit models. Every now and then he uses this as cover to take freelance spy assignments from his old employer. We rejoin him decades later in the 1970s. The emperor of Ethiopia has been overthrown and imprisoned in a military coup, and the new government seems to be getting cozy with the Soviets. The U.K. fears that the Eithiopians aspire to overrun the other nations of East Africa - starting with Somalia -  to form one big Soviet client state. Even worse, Johnny’s old target Jonnet seems to be helping the Soviets achieve this goal from his trusted perch advising the new Ethiopian regime. The Brits want Johnny to return to Ethiopia to finish the job he started 25 years ago - neutralize Jonnet and the Soviet plans before someone gets hurt.

As you may have gathered, this isn’t the “death-ray from the sky” espionage fiction of Nick Carter: Killmaster or a gadget-heavy spy story like a James Bond movie. Instead, Allbeury crafted a more cerebral - and presumably realistic - paperback where old adversaries and allies meet at diplomatic cocktail parties and plot against one another with a greater subtlety than we normally see in pulp fiction. Despite being rather smart, it’s never boring. The brinkmanship was fascinating, thanks to the fact that Allbeury’s writing is staggeringly good. He explains the geopolitics of Ethiopia with a clarity that makes even the dumbest reader (i.e. me) feel like an expert. And, yes, you’ll get your spy action set-pieces at the paperback’s climax.

While back in Ethiopia, Johnny quickly becomes beguiled and infatuated with a mixed-race woman sharing Greek and Somali backgrounds. The problem is that she’s the kept woman of the local KGB colonel, a truly loathsome villain.. The introduction of the titular girl also introduces sex and violence into the thoughtful plotting as well as a pretty sweet love story and insightful observations about western culture.

This was a fantastic novel - weighty and thought-provoking with a lot of substance squeezed into 191 paperback pages. Ted Allbeury was a genius writer who deserves to be rediscovered. Five of his novels have been reprinted by an outfit called Dover Publications but not The Girl From Addis. You’ll need to seek out an old paperback to enjoy it. If you like smart and realistic spy stories, you won’t regret it.

During the second half of the 20th Century, Ethiopia developed a thriving jazz scene. There’s a great instrumental playlist on Spotify called “Ethiopian Jazz” that provides the perfect soundtrack pairing for this atmospheric novel. Thank me later. Here’s the LINK: