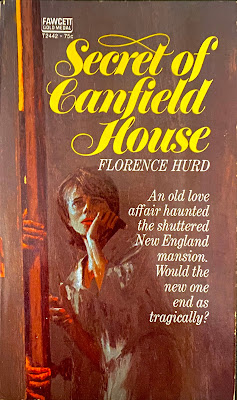 Florence Hurd (1919-2008) was born in Chicago and graduated from the University of Chicago. According to her obituary, she moved to San Diego, California and became a social worker. Later, she married, raised two children, and enjoyed a successful career as a gothic romance writer. My first experience with Hurd's writing is her beloved novel Secret of Canfield House. It was published in 1966 by Fawcett Gold Medal.

The novel stars a young, vulnerable, and attractive woman named Emeline. After moving from Vermont to New York, Emeline discovers that she was never cut out for the big city. When her father dies, Emeline returns to Vermont to pick up the pieces while discovering new employment. She settles on interviewing for a housekeeper job with a snooty woman named Mrs. Canfield. The gig is that she will temporarily live at the vast Vermont manor aptly titled Canfield House. The pay is good but the job is a rather lonely one. Mrs. Canfield and her son Miles only use the house on occasional weekends. But, they want the silver polished and the pillows fluffed – a housekeeper ritual left to Emeline.

Settling into her new employment and residence, Emeline attempts to befriend the house's groundskeeper. He lives in the barn, drinks a lot, and is a mute – not the best company for a lonely woman. After failing to make small talk in the quaint New England village, Emeline finally finds companionship with the family's weekend cook. Through this relationship, Emeline discovers that Miles was married once, but his bride ran away with another man. Oddly, their bedroom remains closed off from the rest of the house, a dusty tribute to lost love...or maybe death?

Emeline's new job becomes a terrifying ordeal when she's forced to contend with an arsonist, her poisoned dog and what could be an “unholy” haunted bedroom. Like something out of Amityville Horror, she hears noises in the cellar, footsteps through the empty house, slamming doors and monstrous faces in the window. Does the “secret” of Canfield House concern a demonic doorway to Hell or a home invasion nightmare?

While Secret of Canfield House possesses all of the genre tropes of a fine New England gothic, Hurd cleverly skirts the edges of a traditional old fashioned suspense tale. The story's sweeping finale comes during an onslaught of howling winds and rain. During a power outage, Emeline explores the house by candlelight determined to solve the mystery. Skeletons in the wall, missing pearls, a hidden diamond bracelet, and a smoking gun smoothly enhances this moody 160-page thriller. I was firmly glued to every page in a white-knuckle race to find the answers. You will be too. Highly recommended!