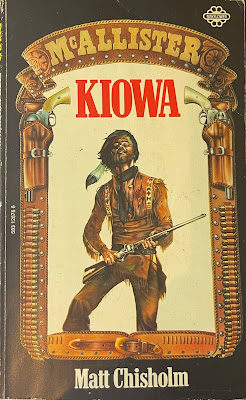 The Piccadilly Cowboys were a loose community of British authors during the 1960s and 1970s writing short and violent novels of the old American West. Using the pen name Matt Chisolm, Peter Watts penned a series of paperback originals starring Remington “Rem” McAllister during the heyday of American western fiction written by Brits. I was fortunate to find a used copy of the sixth installment, Kiowa (1967), during a book-hunting expedition in Abu Dhabi. Starved for reading material in the desert, I decided to give the character a try.

As we join McAllister, he’s in real hot water. He and two sidekicks are travelling across the plains of Texas with horses intending to establish a ranch and a new life. They are awakened by a savage band of Kiowa Indians who kill one of the sidekicks and steal a bunch of McAllister’s horses. With only one horse remaining, our hero takes mount and sets off alone in pursuit of the Indians and some frontier justice.

While on the hunt, McAllister meets a young and cocksure hothead named Arthur McShannon (the author’s choice to give the two main characters similar names gave me a migraine) also stalking the same Kiowa tribe. McShannon is an immature bounty hunter pursuing a fugitive who may or may not be hiding out with the Kiowa at their encampment. They tentatively join forces based on their shared desire to infiltrate the Kiowa and take what they need.

It takes no time at all before the pair is captured by the Indians and subjected to cringe-inducing violence and torture - a signature dish among the Piccadilly Cowboys. Thereafter, the reader is treated to a series of escapes, captures, chases, rescues and ambushes. There’s a damsel in distress to be rescued, and an outlaw to be transported to the law. The writing is solid, the action is non-stop, and the plot is a bit thin.

Worth reading? Sure. It was a fun adventure, but nothing groundbreaking. If a copy is aging on your shelf, give it a grab. However, I can’t recommend spending more than a couple bucks to acquire a copy. A better idea might be to read any of the eight McAllister titles reprinted by Piccadilly Press (no Kiowa, though) for $1.99 per ebook. Odds are that the respected reprint house chose the best of the series for their branded product line.

I emailed western fiction scholar Steve Myall of Western Fiction Reviews to ask him about the McAllister series. Here’s what he shared with me:

There was also a short story, "The Return of McAllister", that appeared in the British publication, Western Magazine.

More stories were published in Norway, but they've never appeared in English. Not just McAllister either - this is also true for the Blade series.

Watts also wrote other series as I'm sure you know, Blade, The Storms, Sam Spur and Hodge which came out under his Chisholm or James pen names.

McAllister also has minor roles in some of Watt's stand alone books.