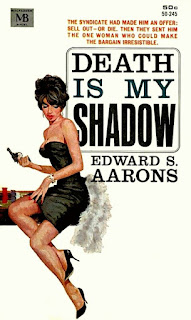 Author Edward S. Aarons is mostly associated with his long-running and successful series Assignment, starring a CIA agent named Sam Durell. However, Aarons was extremely prolific in the decades prior to his Assignment books. In today's Paperback Warrior Primer, we reveal who Edward S. Aarons is and delve into his remarkable literary career.

Edward Sidney Aarons was born in Philadelphia, Pennsylvania in 1916. He attended Columbia University and gained degrees in both literature and history. At the young age of 17, Aarons had his hands in writing short stories while also working through college as a newspaper reporter and a fisherman. This experience probably lends itself to his crime-noir novels, which typically feature reporters and/or fishing towns in the Northeast.

By the end of the 1930s, Aarons had three full-length novels written - Death in a Lighthouse (aka Cowl of Doom), Murder Money, (aka $1 Million in Corpses), and The Corpse Hangs High. These novels were published by Phoenix Press and authored under the name Edward Ronns. 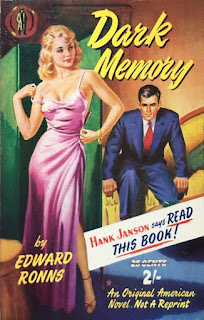 Like most of the mid-20th Century authors, Aarons served in WW2. He was part of the U.S. Navy between 1941-1945 and reached the rank of Chief Petty officer. During his military service, Aarons sold a lot of his short stories to the pulps. He was featured in the late 1930s and 1940s pulps like Thrilling Detective, Angel Detective, Detective Story Magazine, Complete Detective, etc. According to Crime Mystery and Gangster Fiction Magazine Index, I found 92 short stories listed from the 30s through the 50s under the name Edward Ronns. Needless to say, by the time Aarons was discharged from the Coast Guard in 1945 he transitioned smoothly into full-time writing.

In 1947, his hardcover Terror in the Town was published. It was later reprinted in 1964, complete with a suspenseful, horror-styled cover. I had the opportunity to review it for the blog HERE. In 1947 and 1948, Aarons wrote two novels starring Jerry Benedict, a newspaper cartoonist who functions as a private-eye. The first one was called Lady, the Guy is Dead, which would also be printed as No Place to Live. The second book was called Gift of Death and I had the opportunity to review it HERE. Like Terror in the Town, Aarons used a distinct atmosphere with moonlit graves, dark cornfields and a weird menace styled-subplot involving a family curse. Also in 1948 Aarons saw his novel Nightmare published internationally. I also have a review of that novel HERE. 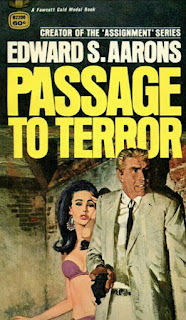 Up until 1950, each of Aarons' published novels listed his name as Edward Ronns. But, in 1950 he used the pseudonym of Paul Ayres to contribute to the Casey, Crime Photographer series created by George Harmon Coxe. The series installment was Dead Heat. In 1951, his novel The Net was published by Graphic and reviewed HERE. Most of the author's 1950s crime-noir novels were published by the top crime-fiction company at the time - Fawcett Gold Medal. They published stuff like Escape to Love, Passage to Terror, Come Back, My Love, The Sinners, Catspaw Ordeal, The Decoy and so forth. But at the same time, Aarons was also being published by Harlequin, Graphic and Avon. In 1950, he had five novels published, two in 1951, two in 1952, two in 1953, and then one more in 1954.

It is remarkable to think that Edward S. Aarons had 20 novels published before he really struck gold. His career trajectory is very similar to John D. MacDonald. Aarons honed his craft in the pulps and wrote stand-alone novels until he was ready to launch a series character that carried him financially for the rest of his career. For Aarons, this was his Assignment series starring CIA operative Sam Durrell and published by Fawcet Gold Medal.

The first series installment is Assignment to Disaster, published in 1955. After the debut, the series ran for 48 installments through 1983. Each book in the Assignment is mostly a stand alone title - the original printings weren’t even numbered. The series hero, Sam Durrell, is a Cajun from Louisiana who left the swamps to attend Yale. It's there that he learned several foreign languages. Later, he served in WW2 in the OSS - which was the real-life precursor to the CIA. When readers first meet Sam in 1955, he’s an operative in the CIA’s espionage division. 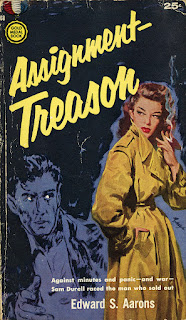 Each novel is a single assignment for Sam. He needs to carry out each mission for the CIA, with his adversaries generally being the Soviets, the Chinese, or one of their client states. Many of the books provide the setting in the title: Assignment Bangkok, Assignment Peking, Assignment Budapest, etc. Others are named after the sexy vixens Sam encounters on his adventure: Assignment Helene, Assignment Madeline, Assignment Zorya, etc. Sam meets a lot of different people trying to get his mission off the ground, and they all join forces to succeed. Assignment is like a combination of Nick Carter: Killmaster and Matt Helm. Better than Killmaster, not as good as Helm.

First, series fans generally agree that these books don't possess the same quality. Second, Will Aarons didn't author these books. He hired a ghost writer named Lawrence Hall to write them. This mystery was crowdsourced and solved on the Mystery File website, and you can read the sequence of edits to their article solving this authorship HERE.

But, aside from the Assignment installments, Edward Aarons was able to sprinkle in another 10 unrelated novels through 1962. Some of these were based on screenplays like Hell to Eternity, published in 1960 and reviewed HERE.

Edward Sidney Aarons died from a heart ailment in New Milford, Connecticut in 1975 at the young age of 58. His obituary in the NY Times stated that his Assignment books sold more than 23 million copies and were reprinted in 17 languages.