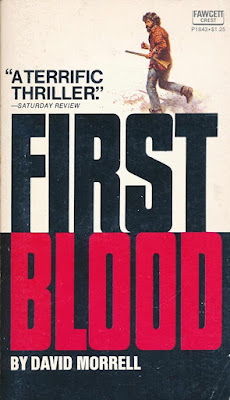 David Morrell's First Blood (1972) is probably one of the biggest influences on men's action-adventure literature behind Don Pendleton's War Against the Mafia (1969). The novel eventually launched a blockbuster film franchise starring Morrell's main character. I've seen the Rambo films and I'm quite fond of the film version of First Blood. I was curious to read the differences between the film and book. With a few extra dollars, I bought a used Fawcett Gold Medal printing of this classic action novel.

First Blood begins with Rambo (no first name) walking into the rural small town of Madison, Kentucky. With his thick beard and long hair, Rambo stands out in this quiet God-fearing community. Wilfred Teasle, the town's sheriff, is a decorated Korean War hero that is highly respected by Madison's residents. Wanting to shield his little town from danger, Teasle forces Rambo out of Madison. Rambo defies Teasle by walking back into town to dine on burgers and a coke. Once again, Teasle escorts rebellious Rambo out of town only to find him returning again. Three strikes and you are out.

Teasle arrests Rambo and the judge books him for a 35 day stay in jail. When the deputies attempt to shave him, Rambo has a flashback to his military service in Vietman. Rambo grabs the straight razor and disembowels one cop before blinding another. He then steals a motorcycle and flees into the mountains. Teasle, wanting control, doesn't want the state police involved in the manhunt. Instead, he leads his own task force to hunt Rambo through the Kentucky wilderness.

First Blood in novel format is much different than the film. Examples: Rambo isn't in town to visit a friend. Rambo doesn't have a close relationship with Colonel Trautman. Sheriff Teasle isn't a scummy villain. But beyond all of that, the film version depicts Rambo as a humble, quiet, reserved man that has a lot to say about Vietnam veterans and the poor homecoming they received. The novel showcases a loud-mouthed, sarcastic, and defiant Rambo as a psychotic veteran battling voices in his head. Perhaps the most striking difference is that Morrell's story reveals that Rambo has killed at least one homeless person in a park prior to arriving in Madison. It's also hinted that he previously killed another man as he attempted to escape by car.

I would be remiss if I didn't state that this original version of Rambo weirded me out. There are some similarities (Rambo is a proficient warrior) and then odd moments (Rambo drinking moonshine with hillbillies) that made me question which version I liked. The book's end result effectively squashed any opportunity for book sequels. However, after the film's popularity, Morrell performed a quasi-retcon to write the novelization of Rambo II and III. I'm okay with that. At the end of the day, I can comfortably say I really enjoyed the book and Morrell's writing is top-notch. Plus, one can never truly have enough Rambo, right?