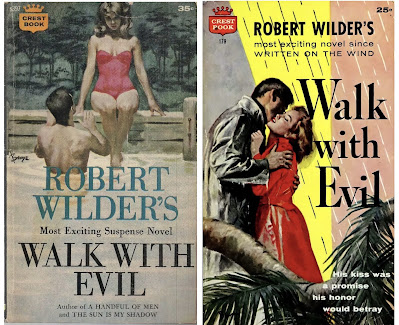 In 1957, Crest Books - a sister imprint to Fawcett Gold Medal - published a paperback called Walk With Evil by Daytona’s own Robert Wilder (1901-1974). Just when it seemed that this obscure novel would be destined for the dustbin of history, it has been reprinted by Cutting Edge Books for modern readers to enjoy.

The story begins in Florida on isolated Redemption Cay, a small spit of land jutting into the tidal mouth of a large river shielded from the Atlantic Ocean by rolling sand dunes. Jeff Martin is a Manhattan newspaper reporter on a five-week vacation fishing in the river from a small rented boat with a temperamental outboard motor.

Not knowing much about boats, Jeff immediately finds himself in a dangerous situation floating too close to the churning waters of the ocean inlet. Fortunately, a pretty young woman in a heavy work boat comes to his aid and tows Jeff to safety. His rescuer’s name is Judy Carter, and she’s the caregiver to a much older, hardcore alcoholic everyone calls the Senator whom Jeff soon meets at the town’s only watering hole. Jeff also re-encounters young Judy later and becomes quite taken with her. They have a flirty chemistry and plan to go on a date sometime soon.

Jeff’s vacation is interrupted by a call from his editor back home. A notorious gangster from the Al Capone era named Edward Valenti has been released from Alcatraz and flown to Florida. The boss wants Jeff to locate Valenti and figure out what the aged mob boss is doing. Could it have to do with the million bucks in heist proceeds that were never recovered before Valenti’s incarceration?

Jeff quickly unearths a historical connection between Valenti and the Senator that begs further questions. We also get to see Valenti in action aboard a chartered Palm Beach yacht with his colorful entourage. A narrative shift introduces some travelers en route to Palm Beach with their own agendas. Nearly every secondary character in the paperback is harboring a secret, and Jeff pieces the puzzle together over the course of the 180 pages.

Walk With Evil is a decent bit of Florida noir. Fans of John D. MacDonald and Harry Whittington will feel right at home with this treasure hunt mystery filled with colorful and quirky well-developed characters. The ending solution was a bit implausible and overly tidy, but the ride to get there was mostly satisfying.