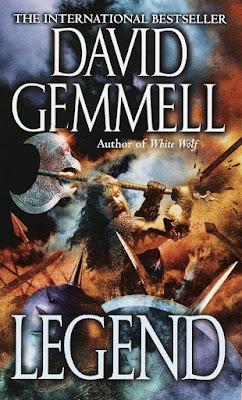 Former British juvenile delinquent turned bar bouncer, journalist, and author David Gemmell (1948-2006) was a writer of violent men’s adventure stories in a fantasy fiction wrapper. Conventional wisdom says that his finest work is the 1984 novel Legend. So, it seemed like a good place to start.

Like all fantasy novels, there’s a lot of world-building that needs to take place before the plot can truly unfold. Gemmell introduces the readers to the relevant tribes who live distantly with one another and periodically engage in trade and war. As the novel opens, a new war is brewing. Our home team heroes are The Drenai who popularly-elect their rulers. They are about to be invaded from the north by a barbarian tribe called The Nadir under the leadership of a superstitious warlord named Ulric. The Drenai people need to raise and train an army, and time is running out.

Our initial protagonist is Rek the Wanderer. He’s a good-natured former Drenai soldier who travels about on his own while engaging in trade and adventures on the road. He’s good with a sword and a bow, but not a huge fan of indiscriminate killing. While travelling, he meets a female swords-woman named Virae, and they become a pair.

The Drenai have a legend about a warrior named Druss who single-handedly defeated 10,000 enemy warriors in a battle years ago. Druss is long gone - maybe dead or maybe just really old and reclusive. As Ulric’s Nadir army of barbarians comes closer to the populated areas of Drenai, the only hope is finding Druss the Legend and hoping that the old warrior is alive and still has some fight left in him.

You know and I know that Druss isn’t dead. Just look at the book’s cover! Once we finally get to know Druss as a character, this good paperback gets great. I won’t spoil it here, but all the stories you’ve read about once-great heroes coming out of retirement for one last battle apply here. Druss is awesome, and the training and battle scenes are epic, bloody, glorious fun. If the novel has any failing, there just wasn’t enough Druss for me.

Legend is a fantasy novel, but there are no dragons or hobbits. There are psychic albinos who form a warrior priesthood obliged to inject themselves into this forthcoming conflict. Most of the paperback follows Druss, Rek and the Drenai preparing for a battle against Ulric’s giant Army with the book’s climax being the lopsided battle itself. It’s remarkably exciting stuff filled with tactical detail, and the pages will fly by.

Legend is a dense read. There are dozens of important named characters, so I kept my own index to keep track of everybody. The geography of the Drenai World is also relevant, and there’s a useful map available to download from the internet that I consulted frequently. To fully appreciate the greatness of this paperback, the reader has to put in some work. It’s completely worth it, but you want to reserve Legend for a week when you have some time to focus.

Best fantasy-adventure novel ever? I’m no expert on this genre, but it was a damn fine read, and I will probably dip into Gemmell’s other novels detailing the battles of Druss and the people of Drenai.