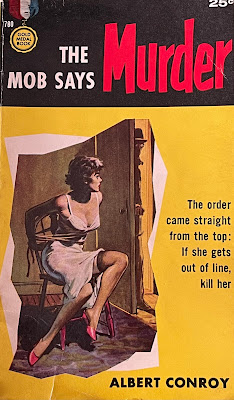 Albert Conroy was one of the cadre of pseudonyms employed by Philadelphia native Marvin H. Albert (1924-1996) to flood the market with his innovative crime and western novels of the mid-20th century. As far as I can tell, he wrote 14 paperbacks as Albert Conroy/Al Conroy between the years 1952 and 1972, including a stand-alone crime-noir paperback from 1958 titled The Mob Says Murder.

Eddie Driscoll is six years into his state prison life sentence for a fatal bank robbery he didn’t commit. In his day, he did plenty of bank holdup jobs, just not the one that landed him in the pen. Driscoll spends his days pining away for his wife who left him and remarried a year into his sentence. Nevertheless, he remains infatuated and in love with the memory of her soft flesh against him.

The person pulling the strings to orchestrate Driscoll’s shaky freedom is a mobster named Bruno Hauser who runs a nightclub and illegal gambling joint called The Ocean Club. Hauser has a problem - the anti-crime governor has been sending state law enforcement goons to Hauser’s joint to bust up the place and interrupt business. Hauser’s solution? The governor must go. Interestingly, the same governor was once the prosecutor who wrongfully put Driscoll away for life. After his guilty verdict six years ago, Driscoll swore revenge on the prosecutor, and Hauser is hoping to utilize Driscoll as an assassin to remove their shared enemy from office permanently. After all, busting a guy out of prison means he owes you a big favor, right?

Albert has crafted another crime-noir masterpiece here. I thought I knew where the plot was headed based on the cover art spoiler, but it quickly became clear that the artist and copywriter had never read the book themselves. The novel’s characters are vivid and the dilemmas - both practical and moral - are taken seriously by the author. The relationships between the characters are especially well-drawn and add a dose of humanity to this ultra-violent and sexy 141-page lost classic. The plot is perfectly constructed and the dialogue is crisp. There’s really nothing to dislike about this novel.

The Mob Says Murder is another work of pulp literary greatness by Albert. The more I read from him, the more I’ve come to believe that he was a uniquely excellent writer of his era and a step above his peers. For reasons unclear to me, I don't believe this one has ever been reprinted since it hit the spinner racks in 1958. Maybe someone will read this review and do something about that. It’s really something special.