You Find Him - I'll Fix Him 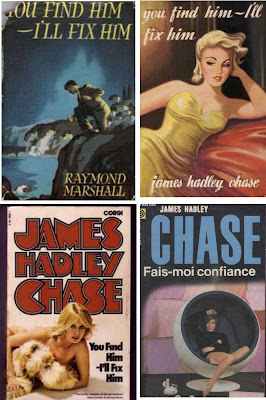 James Hadley Chase was a popular pseudonym of U.K. Author Rene Raymond (1906-1985) for over 90 thrillers. You Find Him - I’ll Fix Him was a 1956 novel originally released under his Raymond Marshall pen name and later re-released as a Chase title. The lean noir paperback was also adapted into the French film Les Canailles in 1960.

Our narrator is Ed Dawson, an American newspaper bureau chief working in Rome. He’s appropriately terrified of his boss, Mr. Chalmers, who is back at the home office in New York. One day Mr. Chalmers calls the trembling Dawson to ask a favor. The boss’ college-age daughter Helen will be arriving in Rome tomorrow and needs a ride from the airport to her hotel. At this point I thought, “I bet the daughter is a real dish, and this airport pickup is about to get way more complicated.”

Upon arriving at the villa, Ed finds Helen floating face-first in the water at the bottom of a cliff and very, very dead. The whole thing looks like foul play causing Ed to face an early-novel predicament: Call the cops or not? A police report might make him a suspect, ruin his reputation and cost him his job. As they say in Italy, “Non buono.” The other option is to hightail it back to Rome and hope that no one ever finds out he was there in the first place. Ed chooses the coward’s route and skedaddles back to his urban bachelor pad.

The author does a fabulous job dissecting the ways we rationalize our bad behavior. The character of Ed is a rationalization gold medalist riding the Bad-Choice Express all the way to Noirville. Of course, Helen’s body is found. Of course, it turns out she was murdered. And of course, Ed’s lies land him deeper and deeper in hot water until he has no choice but to solve the murder himself to save his own hide. As a mystery, the novel works marvelously as clues pile up to a logical conclusion and climactic finish.

As usual, Chase is a good writer who knows how to move a story forward with his economical, no-frills prose. It’s always interesting to read a Brit author writing American dialogue because he can’t help but slip U.K. idioms into the prose that Americans would never use. Some readers find these “mistakes” annoying, but I’m always charmed by them. I’ve read several of his novels, and You Find Him - I’ll Fix Him is by far my favorite of his work. It’s a paperback that would have fit in nicely with Fawcett Gold Medal 1950s releases like Gil Brewer’s The Vengeful Virgin and other works in the femme fatale hit parade.

Bottom line: We have a winner. If you can scare up a copy of this one, buy it and read it.