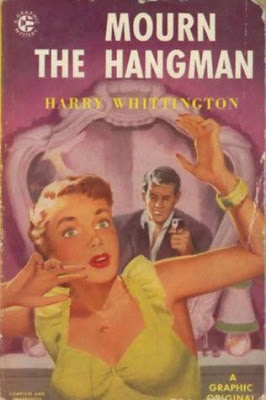 Harry Whittington's second contemporary novel was 1951's Murder is my Mistress, published by Graphic as #41. One year later, Whittington was featured again by the publisher with Mourn the Hangman, Graphic #46. The book was reprinted by Prologue in 2012 in paperback and digital editions.

Steven Blake and Bruce Bricker own Confidential Investigations, a private-eye business based in Gulf City, Florida. Their most recent job placed Blake undercover as a laborer for Arrenhower, a manufacturer with a government contract to produce airplane parts. Blake's job was to infiltrate the company to discover evidence that the company is a contract profiteer (using government money to buy supplies to make products for a competitor). After Blake locates proof, he drives back to Gulf City and reports it to his partner. When Blake returns home, he finds his wife has been murdered. Instead of calling the police, Blake runs smack-dab into another crime-noir plot of “innocent man on the run from the police after finding a corpse.”

In this average Whittington novel, Blake is determined to locate his wife's murderer. The suspect list includes his partner, his wife's former lover, and Arrenhower's CEO. As Blake dodges the law, he becomes the primary target for a motivated police lieutenant. When the net tightens, Blake runs to Jacksonville to escape hired gunmen. Fast cars, a seductress, an ex-fighter, and corporate fraud all prove to be real highlights of Whittington's plot. The emotional, moral centric theme is personal loss and sworn vengeance.

At 150 pages, the book's pace is just too quick to really allow readers to settle into the story. Cheers to Whittington for keeping it breezy, but I wanted to learn more about Blake's involvement with Arrenhower and his backstory as a former homicide detective.

Mourn the Hangman proves that Whittington was still perfecting his storytelling skills in the early 1950s. By 1955, Whittington had nearly 20 full-length, original novels on his resume, including many written under pseudonyms. His catalog varies and this novel is just another Whittington book, nothing more, nothing less.