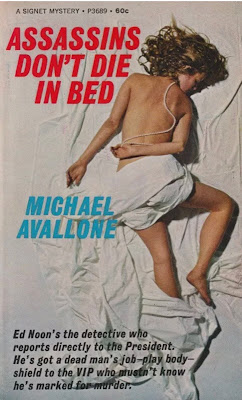 The character of Ed Noon began as a traditional wisecracking, skirt-chasing private eye in the mold of Richard Prather’s Shell Scott. Over time, author Michael Avallone (1924-1999) pulled a clever trick and began sending Noon on spy missions at the request of his recurring client, the U.S. President. Such an adventure is the 17th Ed Noon novel, Assassins Don’t Die in Bed from 1978, currently available as an affordable ebook.

The novel begins with a call to Noon on his red, white and blue telephone providing a direct line to the President. The Man needs Noon to shadow a U.S. elder statesman named Henry Hallmark on a tour of Europe in furtherance of maintaining the peace. The President has reason to believe that Hallmark (America’s Churchill) is in danger of being assassinated and needs Noon to keep him safe. If you’re wondering why the U.S. law enforcement, diplomatic, and intelligence community doesn’t just work together to protect our famous emissary, you have no business reading this paperback.

Aboard the ocean liner is an array of colorful characters and suspect assassins. This includes a Japanese Sumo wrestler named Buddha who can snap silver dollars in two between his fingers. There’s also a woman named Gilda Tiger who is regarded as one of the most beautiful women in the world. Will Noon lay her? I’ll never tell! There’s also an Indian political leader seeking to shepherd his starving Hindu nation under the political umbrella of the Red Chinese.

Further dressing up this cruise ship mystery is an assortment of spy gadgets Noon brings along for the ride. It’s clear by 1968 that Avallone was influenced by the James Bond films, and he wasn’t alone. During this period, there was an arms race to crown a paperback series as “The American James Bond.” With Noon, Avallone threw his hat in the ring and decided to have some real fun with the concept.

Overall, Assassins Don’t Die in Bed is a better-than-average novel for the genre with a really terrific hardboiled ending. Avallone was a solid author who could always be counted on for a good, pulpy read. If you’re new to the Ed Noon party, you safely can start with this one and not be disappointed. Recommended.