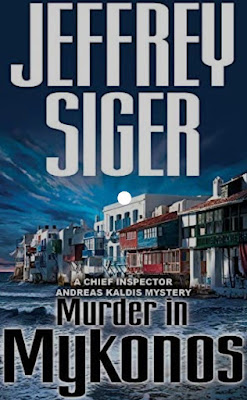 Jeffrey Siger is a Pittsburgh native who fell in love with Greece and has written 11 contemporary police procedural novels starring an Athens cop reassigned to the tourist island of Mykonos. The first installment is titled Murder In Mykonos, and it was originally published in 2011.  The Greeks have gone bonkers for this series despite being written by an American who is only a part-timer in the ancient nation, so I wanted to see what the fuss is all about.

Mykonos is a Greek island in the Aegean Sea 90 miles from Athens. During the months of July and August, the population explodes from about 10,000 to over 50,000 as European tourists descend on the vacation island thick with 16th century windmills, dance clubs, and white-sand beaches matching the sun-baked white buildings. This is the island that our hero, Chief Inspector Andreas Kaldis now calls home. He was an ass-kicking hardboiled cop in Athens who was transferred to sleepy Mykanos after the wealthy residents of the island demanded better, more aggressive policing.

Early in his new island job as Police Chief, a murdered body of a missing tourist girl is found hidden in an abandoned church. Further investigation shows that the murder may be connected to an earlier homicide, making Andreas come to the preliminary conclusion that there is a serial killer operating on this island paradise — a fact that would be devastating to the tourist-based local economy. Even worse, the murders seemed to be ritual killings of some sort.

Mykonos makes its money from tourism and the island’s leaders doesn’t want anything to upset the visitor trade. As such, there’s a tendency to sweep bad news under the rug. If someone reports a missing foreign woman in Mykonos, the police instinct is to assume she left willingly and no missing-person report is filed. This poses a real challenge to Andreas as he’s trying to get his hands around the number of missing girls who may have been victimized by this hypothetical serial killer.

Anyone with an interest in serial killer police procedural mysteries or life in the Greek Islands is sure to be pleased with Murder in Mykonos. The fact that it was written by an American was helpful because he took the time to explain things to readers unfamiliar with Greek culture or the unusual setting. No punches are pulled in thoughtful critiques of the island, its residents, and the underlying political climate.

If you like crime fiction set in exotic locales, this novel is for you. Siger knows his way around the structure of a good mystery novel, and his characters are vivid and fully-realized. I look forward to the next Andreas Kaldis novel. Recommended.