Image of a Ghost 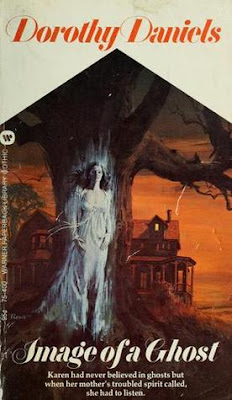 We've talked a great deal about prolific author Norman Daniels, but haven't posted a single review for his wife's work. Dorothy Daniels (born Dorothy Smith) authored nurse-fiction and romantic short stories before finding success in the gothic genre. She sold over 10 million books between 1965-1975, culminating in 150 total works in print. My first experience with the author is her 1973 novel Image of a Ghost. It was published by Warner and then reprinted again in 1976. Both feature artwork by prolific Men's Adventure Magazine artist Vic Prezio.

Janet Bancroft inherited a fortune after the recent death of her mother. A year and a half later, Janet spots a paranormal article in a French magazine explaining odd occurrences in a large Maine house. Photographs are included that depict a ghostly woman standing on a staircase. The article includes an invitation from the homeowner asking anyone who recognizes the apparition to call or visit. Janet hurries home, packs a bag, and drives to Maine to talk with the owners. Why? Because Janet recognizes the ghostly woman asher dead mother!

Image of a Ghost is mostly a traditional mystery that tips a foot into a murder procedural. The narrative is mostly just cut-and-paste as the owners, Janet, a dashing male attorney, and others remain in the home hoping to locate the answer to why Janet's mother has risen from the grave. This is a gothic novel, so anyone worth their salt knows there's nothing paranormal about it. The typical Scooby-Doo explanation is offered, but that doesn't necessarily leave out any violent murder or sadistic hi-jinx. Daniels' plot includes a murder mystery as fingers are pointed at all of the guests hoping to uncover clues.

Overall, this is just a below average gothic that is missing a proper atmosphere and story. The characters are one-dimensional, the ghost isn't that interesting, and the murder mystery leaves a lot to be desired. In other words, Image of a Ghost is an image worth forgetting.