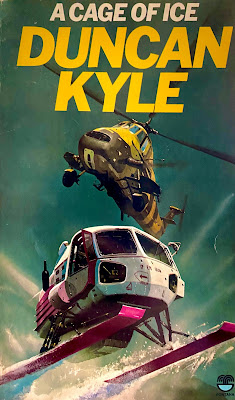 Duncan Kyle is the name printed on a number of 1970s and 1980s high-adventure novels. In reality, this is John Franklin Broxholme (1930-2000) using Kyle as a pseudonym. I really enjoyed my first sampling of the author's work, the action-packed 1976 novel In Deep (aka Whiteout!). I wanted to try another, so I randomly chose Cage of Ice from my bookshelf. It was the author's first published novel, originally appearing in hardcover in 1970 (Harper Collins) and later reprinted numerous times in paperback. Pictured is my 1987 Fontana edition, which has the best cover -  in my opinion - of the reprints I've seen.

In Cage of Ice, protagonist Dr. John Edwards is a British surgeon and teacher residing in New York. In a unique plot set-up, Edwards receives an envelope addressed to Professor John Edwards, which isn't him. Once he receives the envelope, he is nearly killed on the highway by a motorist and his apartment is ransacked and the doorman assaulted. Whatever was in the envelope is then stolen by these mysterious men. Edwards, desperate to learn why he has been targeted by killers, tracks down the envelope's origin and discovers it was supposed to go to Professor Ed Ward....not John Edwards. Get it?

Edwards finds Professor Ward's residence, but when he arrives, he finds the man murdered. After surviving another round of killers, Edwards is then arrested on suspicion of murder and bailed out of jail by the CIA, who then safely ushers him to their headquarters in Washington D.C. What the heck is happening in this high-adventure-missing-high-adventure narrative?

Here's what amounts to be the most absurd plot I've discovered yet in a men's action-adventure novel:

The Soviets need more shipping alternatives and routes to contend with the West. To do this, they need sea ports on their northern coastline. But, the area remains frozen nearly year round, so the region is mostly useless. The Soviet Union needs the sea level to rise so they can build a giant dam to allow warmer water onto their coasts while also funneling cold water to Japan, annihilating that country's climate (along with submerging most of Northern America's coastline). To force sea levels to rise, they need the Arctic Ice Caps to melt. Anyone knows that the sunlight bounces off the gleaming white snow and ice, thus it stays frozen. But, the Russians create a carbon that they can release from aircraft that turns the Ice Caps the color of dark ash. Now, the sun can become the Soviet Union's ally by melting the ice and raising the sea level. It is so ridiculous, yet somehow remarkably brilliant!

A Russian scientist has created this whole process, but he wants out of the Soviet Union so he can spill his secrets to the U.S. and avoid a global catastrophe. But, the U.S. already knows the secrets based on correspondence this Russian scientist had with Professor Ward, who has been killed by Soviet assassins already. The Russian scientist is being held at a secret facility in a frozen wasteland off of Russia's northern coast. The CIA then recruits operatives from Japan, Scotland, England, and the U.S. to make the impossible journey, through the ice and snow, to retrieve the scientist (for some reason). But, because Edwards is a doctor, he's recruited as well because most British surgeons know how to climb icy mountains, navigate specialized snow vehicles, shoot straight, and survive under Earth's harshest elements.

As insane as all of this sounds, Cage of Ice is a fantastic adventure if you just dismiss the destination and enjoy the ride. Duncan Kyle is writing to entertain readers and this is just pure popcorn fun. The author creates dramatic, harrowing situations for this team to endure and overcome. The survival elements are there, but they don't consume the action. Instead, it is endurance, skiing, breaking into the installation, catastrophe, and creating a backup plan on the run that keeps the pages turning. The book's finale has an awesome firefight with helicopters and a nearly apocalyptic showdown with a nuclear submarine.

If you suspend disbelief to concentrate on the overall action and adventure, then Cage of Ice is an absolute winner. It's similar to the greats like Hammond Innes and Alistair MacLean in terms of the faster pace and death-defying sequences. It's just tissue thin on plot, so your mileage may vary. I recommend it, and I rarely steer you wrong.