The Woman on the Roof 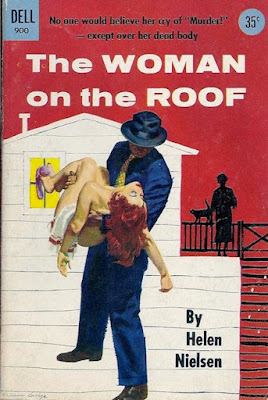 According to Wikipedia, Helen Nielsen (1918-2002) authored television scripts for classic mystery shows like Perry Mason and Alfred Hitchcock Presents. Before her writing career, she worked as a draftsman during WW2 and helped design aircraft like the B-36, XB-47, and P-80. She authored nearly 20 novels, including a series of detective novels starring District Attorney Simon Drake. Stark House Press has been reprinting some of Nielsen's stand-alone crime-fiction novels like The Woman on the Roof. It was originally published in 1956 by Dell and now remains as a reprint through Stark House Press's Black Gat Books imprint.

Wilma Rathjen spent a considerable amount of time in a mental institution. There, she rehabilitated and learned new skills. Now, she lives in a rooftop apartment in Los Angeles and spends her spare time spying on her neighbors. The rent is completely paid by her wealthy brother Curtis, a prominent politician and lawmaker. Wilma still likes to keep busy, so she works at a nearby bakery designing birthday cakes. Thankfully, the author's final lines in Chapter One sets up the narrative.

From her rooftop view, Wilma discovered that her neighbor Ruby, a beautiful female dancer and entertainer, was lying in her bathtub dead. But, Wilma didn't want to risk being scolded by the police for snooping or reporting a dead body. She may have to return to the mental hospital where the food is bad and the staff is abusive. She can't do anything to jeopardize her comfy living arrangement. Wilma is still hiding the secret when her friend and neighbor Pop peers through Ruby's window and discovers her corpse.

The authorities are called and the narrative then focuses on John Osgood, a 40 year veteran police sergeant and Frenchy Bartel, a homicide detective, as they attempt to find Ruby's killer. But, the tension escalates when another tenant is murdered and Wilma sees someone snooping around Ruby's empty apartment at night. The police, and readers, receive a surprise when someone walks into Ruby's apartment claiming to be her husband. Is he the killer, or is it a pesky photographer?

The Woman on the Roof didn't entertain me as much as I had hoped. I rarely strike out with Stark House Press, but I just felt the book was too long and didn't have enough to keep me occupied. It's written well and I enjoyed the characters, but Wilma left something to be desired. With her limited capabilities, I became bored with the events surrounding her. The mystery was engaging enough, and Ruby could have been sexy as Hell. But, she's a bloated corpse before the narrative even starts, so any sexy chemistry was completely voided. Osgood's role was interesting and he turned the story into a procedural investigation, although a dull one.

Overall, this was my first sampling of Helen Nielsen's work and I'm intrigued enough to try another.