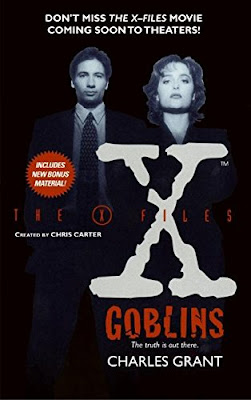 I'm an X-Files fan, one of those weird X-Phile nuts. To prove it, I have an old trunk filled with show toys, coffee mugs, calendars, books, action-figures, autographs, and various magazines like TV Guide. I even have VHS recordings of various episodes as they originally aired on Friday nights. I've read the graphic novels, fan-fiction, and some of the books. I've had Goblins for a long time and recently decided to listen to the audio version while earning my keep performing honey do chores. It was originally published in paperback by Harper in 1994 and authored by Charles Grant, a prolific writer that specialized in horror.

In a small town in Louisiana, two retired U.S. Military officers are slashed to death. However, eyewitnesses claim a hand came from out of nowhere, as if it was nearly invisible when making the killing stroke. One of the men was to marry the cousin of a sportswriter that Mulder knows. The sportswriter comes to Mulder with the murder mystery, but he's already on it. The F.B.I. has already been called to perform the investigation quietly, thus Scully and Mulder are brought up from the basement to handle what may, or may not be, a legitimate X-Files case.

The problem that the F.B.I. agents face (and readers for that matter), is that there are too many cooks in the kitchen. Grant doesn't leave well enough alone and partners two rookie agents to accompany Scully and Mulder on the case. Thus, there's multiple investigations with different pairings of the agents. Also, the sportswriter comes to town as well to conduct his own investigation, which just complicates the narrative more.

I'm not sure if Grant had actually watched an X-Files episode when he was hired to write this sort of television tie-in literature. Mulder's characterization is off, behaving in ways that doesn't really match his television persona. In this book, Mulder isn't as sarcastic with his responses or as serious as the TV character, and does the investigation in ways that has no real purpose or flow. I also didn't sense any of the guilt ridden emotion that wrecks Mulder on screen, although Grant does include a flashback scene of Samantha disappearing (Mulder's sister and major series story arc). He's also overly happy about things beyond the paranormal, which is unusual. The idea is that Mulder only becomes enthusiastic when researching X-Files-type cases.

My main issue with Goblins is that it's just boring. Nothing really happens, the agents spin their wheels, and I figured out the whole “goblin” mystery in the book's first few chapters. The bumpy narrative was a struggle to get through and I was left thoroughly disappointed that I've hung on to this paperback for nearly 30 years only to find out it isn't very good.

There are numerous paperbacks available, including a couple that retcon Scully and Mulder's teen years. I'll continue reading X-Files related stories and books, but there's no reason for you to read Goblins.