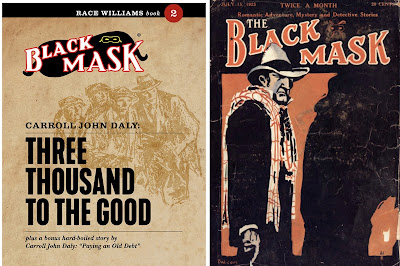 “Three Thousand to the Good” by Carroll John Daly is a 20-page short story that originally appeared in the July 15, 1923 issue of Black Mask magazine. It’s the second appearance of Private Detective Race Williams, the first hardboiled detective series character ever.

Our narrator Race Williams is ostensibly a private investigator, but he’s the first to admit that he’s really a “gentleman adventurer” who lends his services targeting criminals on behalf of paying clients. In this case, he is hired by a fellow named Abe who needs Race to be the bagman for a blackmail payment Abe owes some crooks in exchange for incriminating evidence in the possession of the blackmailers. Abe is no choirboy himself, and the activity that opened him up to blackmail in the first place underscores Race’s own operation in a morally grey area.

The blackmail payment is $10,000, and Race strikes a deal with Abe. If Race can come back with the incriminating evidence from the blackmailers and Abe’s $10,000, Race gets to keep $2,500. If Race fails, he gets nothing. Abe jumps at this opportunity for Race’s value-added services.

The story quickly shifts to Race’s attempt to double cross the blackmailers, and fans of tough-guy action find plenty to enjoy. Staging a double cross is one thing, but getting away with it is quite a different challenge. Race eventually gets to the bottom of the situation with a somewhat odd conclusion to the story.

In the world of good-and-bad Race Williams stories, this one was solidly satisfying and will please fans of Race and his imitator, Micky Spillane’s Mike Hammer. The story has been compiled elsewhere, but the cheapest option is a two-dollar ebook from Black Mask that also includes a bonus stand-alone story from Daly called “Paying an Old Debt.”

While we’re here, I’ll say that “Paying an Old Debt” was from an April 1923 issue of Black Mask - one month before Daly launched the Race Williams series. The narrator is a jailbird who cons his way into a butler job for the purpose of ripping off his host’s diamonds. It’s a great little story with an O. Henry styled ending. I thought it was a stronger story than the Race Williams one.

The Black Mask ebook containing the two stories is only two bucks and completely worth it. The stories have aged extremely well and stand as a monument to the very beginning of hardboiled crime fiction.