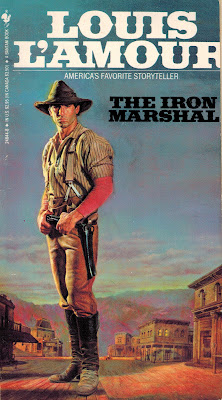 The Iron Marshal, L'Amour's 94th novel, was originally published by Bantam in 1979. It is the traditional L'Amour storytelling experience about the unlikely hero ascending from rock bottom to new, lofty heights based on overcoming grueling hardships and oppression. This sort of story is what L'Amour thrived on and this novel proves he was an absolute master of the craft.

In the book's opening pages, readers are introduced to young Tom Shanaghy, still wet behind the ears as he grows accustomed to life in the big city of New York. It's the late 1800s, and the Irishman immediately finds a brawl on the docks before finding a lead on a job as a server and barkeep at a local pub. The dive is owned by a man named Clancy, and it isn't long before Tom is working his way through the businessman's ranks, from blacksmith to financial clerk on a journey that leads him rubbing shoulders with Clancy on his financial affairs. Eventually, the novel begins to resemble an early mob story with warring factions fighting over pubs and gambling.

The narrative finds its rhythm when Shanaghy escapes the city by hopping a train. Exhausted, he sleeps his way to Kansas, where he is thrown from the train by a railroad detective. Oddly, when he lands on the hard ground, he finds that the detective has tossed a large backpack to him as well. Inside are supplies, clothes, a revolver and a shotgun. After Shanaghy runs right into a lynching, the man he helps free advises Shanaghy that the pack and shotgun belong to a lawman named Rig Barrett. He says that anyone carrying the famous shotgun is going to have a target on their back. Has Shanaghy assumed the identity of this Iron Marshal?

L'Amour's novel turns into a remarkable crime-noir once Shanaghy arrives in the small Kansas town. The narrative threads a number of solid plot points together, but it all centers around the town choosing Shanaghy as their new marshal. His order of business is to make sure the train carrying a large payroll isn't robbed. But, after investigating, he learns the heist is happening, but doesn't know all of the players. It could be residents, retailers, criminals from out of town or the railroad men themselves. This is the magic of the story, like any hardboiled private-eye story of the mid-20th century. The mystery is both compelling as well as action-packed.

The Iron Marshal is just a fantastic western with an extremely likable hero in Tom Shanaghy. I loved the side-stories and how L'Amour neatly tied it all together to deliver an extremely entertaining reading experience. Highly recommended for both fans of westerns and hardboiled procedural storytelling.

Note - The model for the cover pictured here is the "face of a thousand paperbacks", Jason Savas. We told his story in a 2020 article HERE.