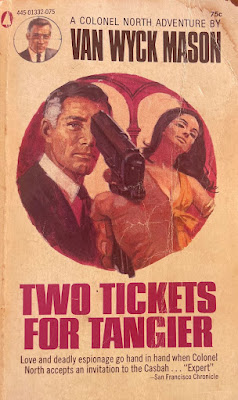 Francis Van Wyck Mason (1901-1978) was a renowned international traveler and author with 78 books to his credit. He began his career writing stories for the pulps where he developed his signature character, U.S. Army Intelligence Colonel Hugh North (7 stories, 25 novels) in 1930. The stories began as mysteries, but shifted into spy adventures with the advent of paperback original novels. My first taste was the character’s 18th novel, Two Tickets for Tangier, from 1955.

North, who works for a U.S. spy agency called G-2, is on vacation in London romancing a sexy babe named Lady Angela Forester. He’s known Angela for awhile, but he’s not initially aware that she’s a British MI-2 spy. Their romantic time together is cut short when North is summoned into his boss’ office in London, and Angela has to fly to Tangier for something or other.

Don’t be embarrassed if you know nothing about Tangier. I’m here for you. It’s a port city located in Morocco on the northern coast of Africa — across from the Strait of Gibraltar from the southern tip of Spain. In 1955, Tangier was still an international city largely operating independently as a free trade zone beyond the control of much oversight from Morocco. As a result, Tangier was a multi-cultural, freewheeling city — an “anything goes” kinda place.

As luck would have it — the paperback’s title gives it away — North’s new assignment is also to Tangier. The mission involves a gas called Thulium-X that creates intense cold temperatures similar to those of outer space. The gas was perfected by a former Nazi scientist named Dr. Vogel, who had been enslaved by the Ruskies since 1945. Somehow the scientist escaped and is hiding in Tangier. North needs to find him and buy the formula before the Soviets can make the grab.

The plotting in Two Tickets to Tangier was good, but not remarkable. The writing, however, was a slog. The author went to such pains to portray North as a debonair man of the world that he really came off as a foppish snob. He peppers his language with French phrases and seems like the last guy I’d ever send into a critical mission. Painstaking descriptions of locations abound and offhand references to obscure characters from previous novels litter every scene.

I was really optimistic about this series, but this first foray into the world of The Man From G-2 really left me cold. If there’s a good installment in this series, please hit me up. I assure you that Two Tickets to Tangier isn’t the one.