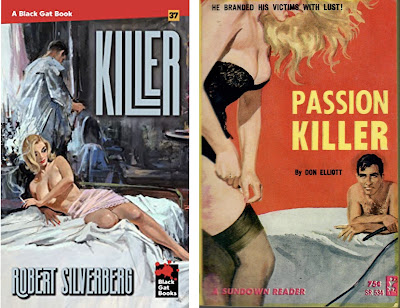 Before he was science-fiction royalty, Robert Silverberg was a cranking out cheap genre paperbacks to make ends meet. His output included sleaze novels like 1965’s Passion Killer — originally released under the pseudonym of Don Elliott when the author was 29. After discovering that the book is actually a tidy bit of crime noir fiction, Stark House Press imprint Black Gat books has re-released the paperback under the name Killer.

Lee Floyd has just arrived in Manhattan after being hired to kill Howard Gorman’s wife, Ethyl. You see, Howard has recently met a girl named Marie and has decided to upgrade. As such, he needs Hitman Lee’s help in disposing of this Ethyl situation.

There are some interesting crime noir manipulations and double-crosses among the sex scenes that made Killer a lot of fun to read. It’s not the top-tier hitman fiction we periodically receive from Max Allan Collins and Lawrence Block, but it’s light-years better than most 1960s sleaze fiction. Many authors aren’t proud of their output in this genre, but I’m glad Silverberg has made peace with his past because Killer is a winner. Not a masterpiece, but certainly worth your time.