Say it with Bullets 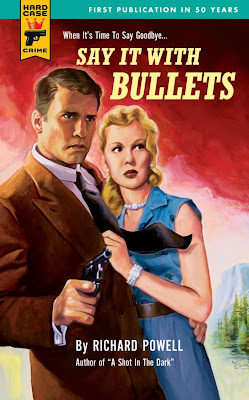 Richard Pitts Powell (1908-1999) was a Princeton man, an ad man, and a newspaper man who worked on Douglas MacArthur’s staff during World War 2. After the war, he proceeded to write 19 novels in a variety of genres. His 1953 paperback, Say It with Bullets, found new life as a Hard Case Crime reprint in 2006 and remains available today in digital and paperback editions from Wildside Press.

The novel wastes no time thrusting the reader into the action.  Bill Wayne is traveling across the U.S. with the goal of tracking down five old friends - war buddies and later business partners. One of the men shot Bill in the back overseas in China. Bill is not sure which one of his buddies tried to kill him, but he intends to put that old friend in his grave once he figures it out.

Bill will be traveling many miles in this ad hoc vendetta investigation. His suspects live in Cheyenne, Salt Lake City, Reno, San Francisco, and Los Angeles. Another interesting wrinkle: Bill  and his .45 are covering this ground in a bus filled with tourists who signed on with Treasure Trips, Inc. for a tour of the American West. The set-up is totally contrived, but highly-creative and a perfect way for the story to unfold.

Another contrivance is a sweet woman on the bus named Holly, who coincidentally knew Bill when they were kids. Holly always had the hots for Bill, but he’d prefer to fly under the radar on this trip. After all, he’s more interested in murder than seeing Yosemite Park. Bill initially shuns Holly’s advances, but the reader can see where this storyline is headed.

Flashbacks fill in the details of the back-shot that failed to kill Bill in China after a heated argument with his five business partners. After returning home to Philadelphia, another unknown subject took another shot at Bill. He narrowed the suspects down to the five partners, which brings us back to this weird bus ride.

When Bill reaches his first suspect, the plot takes an unexpected — and rather clever turn. I won’t give it away, but the mission changes from a standard revenge story to a mystery in which the hunter is being hunted. You won’t be disappointed. Leave it at that.

The author’s prose is straightforward and no-frills, but he had a real knack for snappy dialogue. As a protagonist, Bill has an evolution from a cranky misanthrope to a fully-realized man with whom the reader can eventually empathize. By this point in his career, Powell had  nine books under his belt, so he had cracked the code of writing sharp, terse prose with great pacing.

Say It with Bullets is an easy recommendation, and has spurred my interest in reading more of Powell’s writing. Thanks to several forward-leaning reprint houses, it won’t take much hunting to find more of his work.