The Grave's in the Meadow 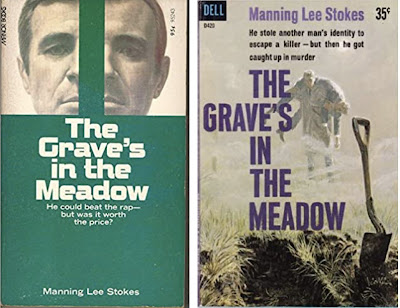 To the extent that he’s recalled at all, Manning Lee Stokes (1911-1976) is remembered for his pseudonymous work in men’s adventure paperback series titles, including John Eagle: Expeditor, Richard Blade, Nick Carter: Killmaster, and The Aquanauts. However, Stokes began his career authoring mystery novels beginning in 1945 and beyond. His crime-fiction output includes a largely unknown hardcover novel from 1959 titled The Grave’s in the Meadow that was later reprinted by both Dell and Manor Books in paperback.

Our narrator is an amoral sociopath named Dick Ludwell who just witnessed the murder of a middleweight boxer for refusing to take a dive. Dick was the only person to witness the killing at the hands of a ruthless mob henchman, and he correctly figures this makes him a marked man. Dick is a crooked newspaper reporter who supplements his income by providing tips to the local mob boss, but this cozy relationship isn’t going to be enough to save Dick’s bacon this time.

Dick decides to hide 100 miles from the city in his friend’s vacant farmhouse, and this is where the plot really takes off. The farm is located on the outskirts of a small town where everyone knows one another, and Dick assumes the identity of a dead hobo for his new life in exile. As Dick tries to assimilate into small-town life, an astute genre fiction reader begins to see exactly the direction the paperback is headed. He meets a girl and a sweet relationship evolves bolstered by the lies Dick tells her about his identity and background. Could this story be the tale of a heel redeemed by true love?

About halfway through the novel – right when you think you see where it’s going – there is a bonkers scene that turns the plot into a nasty, violent noir. I promise that there’s not a single reader who will ever forget the scene that sparks the paperback’s turning point. I never saw it coming and I read a ton of this stuff. From that point forward, the book erupts into one of the finest crime-noir stories I can recall reading in a long, long time. It reminds me of Dan J. Marlowe’s The Name of the Game is Death, but this Stokes novel predates the Marlowe classic by three full years.

The paperback sprints to the finish line with an exciting, bloody climax. A couple pages from the conclusion, you’ll be dying to know what’s going to happen at the very end. Stokes’ plotting is superb and he does a fantastic job getting you into the narrator’s warped mind. I honestly can’t get over how exciting and wild The Grave’s in the Meadow is, and I can’t believe it hasn't been reprinted since 1973. This is a forgotten paperback definitely worth rediscovering. Readers should seek out a copy, and reprint publishing houses should acquire the rights and resurrect this lost classic. Highest recommendation.