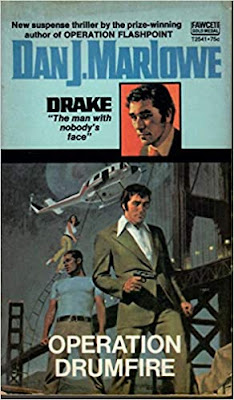 After the success of The Name of the Game is Death (1962) and One Endless Hour (1969), crime-noir author Dan J. Marlowe found his heist hero in protagonist Earl Drake, the “man with nobody's face.” The Earl Drake series, for lack of a better name, includes 12 total novels, all published by Fawcett Gold Medal between 1962 and 1976. We've covered the first five novels right here at Paperback Warrior and continue our coverage with this sixth installment, Operation Drumfire, published in 1972.

In Operation Drumfire, readers become fairly familiar with Earl Drake's backstory. He was a professional bank robber who now works occasional assignments for a special agent named Erikson. It is never explained who Erikson works for beyond hinting at a sub rosa agency deep within Washington D.C. Drake's lover is a tenacious former barkeep named Hazel, who has a talent for gambling on horses and the skills to pilot the couple's airplane. She's also a sexy cowgirl that owns a sprawling ranch built from the fortunes of her former husband. Beginning in the series fifth installment, Operation Breakthrough, the duo is joined by an eccentric martial arts expert named Candy and his Chinese girlfriend Chen Yi.

In this book's opening chapters, Erikson visits Drake and Hazel to show them a video of a bank heist at a horse-racing track. Erikson's agency feels that a think-tank defense contractor called the Institute of Defense Analysis (IDA) may be behind it. The idea is that mathematicians inside the agency put together an elaborate plan to knock off the track. Now, due to Erikson's involvement in a meeting between senior leaders in Mexico and the US, he's touching shoulders with IDA. His growing suspicions of their abilities may lead to chaos with the meeting. He wants Drake and Hazel to infiltrate the agency by going undercover as mathematicians inside their headquarters.

Honestly, I have no idea what is happening in this book. None of it makes any sense to me. Normally, I can stay fairly entrenched with whatever Marlowe is springing, but I'm not even sure he knew what was going on. It's like a chain of events including a Black Panthers type of military presence in Oakland that Candy must deal with. Then, Drake has to fake his math skills inside the agency while Hazel gains clues for something or another. There's an explosion somewhere and a firefight at the end. It was like Marlowe had individual events he wanted to schedule in the narrative, but had no logical way to connect them.

But, it isn't all completely lost. Drake changes his old snub-nosed .38 revolver for an automatic .9mm. I felt this was a major change for the character, like a promotion into the big leagues. Also, one of the four main characters is killed off in this installment. Shamefully, I felt good about that. Other than those positives, Operation Drumfire is more like Operation Dumpsterfire.