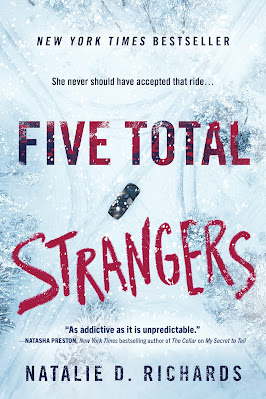 I spend a lot of time at Target. My wife loves the place and one of my daughters loves throwing away wads of cash for overpriced records of today's trendy pop stars. What's a book-loving Dad supposed to do other than abandon the dependents at the shoe aisle and then hang for a half-hour in the ragtag section of books that Target deems as literature? The end-result is that the family walks out with dog toys, socks, those little colored egg-shaped lip balms and any modern thriller that resembles a horror novel with blurbs like “addictive and unpredictable”. Thus, this is the reason I now own Five Total Strangers by Natalie D. Richards.

When readers first meet Mira, she's landed in a Philadelphia airport at the start of a blizzard outside. She's a teenager, in high school, and her decision making skills aren't fabulous. Due to the next flight being canceled, she decides to take a free ride from her seatmate, an arrogant young woman named Harper. It's like an early scene out of the old John Hughes' film Planes, Trains, and Automobiles. This awkward pairing with a complete stranger then becomes complicated. Harper claims that three of her friends will be joining them in the car because they all need a ride. Yet, once they are collectively joined in the vehicle, Mira learns that the trio of people are complete strangers to Harper. Why did she lie?

The author includes these eerie, handwritten notes every few chapters from Mira's secret admirer. As the book continues, readers will notice that the notes are written months after the events that take place on Mira's ride from Hell. The notes also suggest that whoever is writing them was a passenger in Harper's car that day, but readers won't learn their identity until the book's final chapters.

Five Total Strangers has all of the ingredients for a successful thriller – suspicious people, a harrowing event, an inescapable situation, and a terrifying atmosphere. The author's use of ice and snow on Pennsylvania's rural back roads made the atmosphere nearly claustrophobic, heightening the intensity inside the car.

As good as these ingredients are, the book is just too long at 300 pages. Eventually, the mystery and the shady passengers couldn't keep my attention, which ruined the ultimate reveal at the end. By that point I just wanted the ride to be over. If you love slow-burns, then this one may be for you. I will add that the book is young-adult, but nearly all of the horror and thrillers these days caters to that audience, so don't let that throw you off. If you can get it for a few bucks, it might be worth your time.