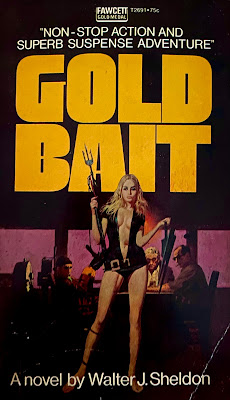 Colonel Corby spent years fighting in Korea and Vietnam before an injury ended his military career. After rehabbing at a local hospital, Corby cashed out and wanted a retirement somewhere cheap with lots of booze and sex. So, it's in Mexico that entrepreneur Max Haggard finally locates Corby, nestled between bottles of tequila and a beautiful senorita's legs. At the front door, Haggard explains that he has traveled from Korea just to find Corby. He ain't selling vacuum cleaners. What he has to offer is worth over $4 million smack-a-roos.

Haggard reminds Corby of a Korean battle at sea in which Corby, manning a small South Korean boat, managed a direct hit to sink a battleship. But, little did anyone know that the battleship held a metric ton of fun payable in small, shiny gold bricks. Those same bricks are now sitting on the seabed wherever Corby scored the hit. Haggard learned of the ship's fortune in Korea, but no one could locate any whereabouts of the sunken vessel. Only Corby can recall the coordinates After squinting at charts, Corby knows where to find it. But, he's keeping his 'ole kisser shut until they can put together a salvage job.

Author Walter Sheldon, often writing as Walt Sheldon (once as Ellery Queen), made stacks of dimes writing pulps in the 30s and 40s. Like everyone looking for a better payday, he switched to paperback originals and dished out crime-noir, science-fiction, horror, and action-adventure novels. By the time he wrote Gold Bait, published in 1973 (Fawcett Gold Medal), he had the writing machine well-oiled. So, after consistent success, Sheldon presented Gold Bait in an experimental, different way.

The first page of the book is a CIA memorandum from Mr. Fancy Pants to another Fancy Pants outlining Corby's possible recruitment into the organization. The memo says that the pages in the book are documents recovered from Corby, other people and agencies. The last page of the book is another CIA thingy suggesting that the documents were reviewed by enough peeps to make a final decision. The last line states that Corby is either eligible or ineligible for recruitment. I'm not telling you how it ends.

So, what are the pages inside? What do they contain? It's a conglomerate (that means buncha) of diary entries from Corby and that blonde bombshell that's on the front cover as well as letters and police reports that tell the tale of this foursome attempting to recover the sunken gold while being watched by the pesky military. Mostly, it all works out and makes this a real cool read, but I wondered how these guys had the time to write diary entries while dodging bullets, assassins, criminals, and scoundrels?

I'm sure you just gawked at the cover and spent your $5 because it is a Robert McGinnis painting and you're a filthy savage, but if you want to open it up and read the words, I think you may get hooked on Gold Bait. I sense it could have been a series of books starring this Corby fellow blowing up people and places while pulling down panties. But, I don't think a sequel even happened and that's a real bummer. Anyhoo, Gold Bait is recommended.