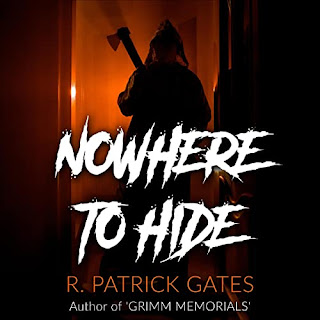 R. Patrick Gates is a teacher, young adult and horror author, husband, and dog owner. Beginning in the 1990s, Gates has authored a number of horror novels like Tunnel, Deathwalker, Savage, and The Prison. The author created a two book series, Grim Memorials and Grim Reapings, about an evil character named Eleanor Grimm terrorizing the small town of Northwood. My first experience with Gates is his psychological horror novel Nowhere to Hide. It was originally published by Pinnacle in 2008 and now exists in a brand new edition as an audio book by Capricorn Literary.

The book begins with a bloodbath. Young Billy Teags returns from school to discover his mother and brother have been brutally murdered. As gruesome as this scene is, it pales in comparison to the horrific events that unfold throughout the narrative. Billy discovers that the killer is still inside the house.

In Nowhere to Hide, Gates blends a unique concept with present and past events to create this terrifying horror novel. Readers know what Billy is experiencing in the present, but flashbacks to the days before bring new light to the situation. Billy knew about the killer in advance and had notified his parents of a murder he witnessed in his dream. They didn't believe Billy's account, not realizing that Billy has a psychic link to the killer.

Gates is far from a traditional storyteller and has a rather abstract style that is reminiscent of Jack Ketchum or Bryan Smith. The writing possesses violent, in-your-face imagery that's not for the squeamish. While the horror is prevalent, Gate's creates a multifaceted monster that surprisingly fastens an emotional bond with the reader. In terms of thrilling suspense, it's the reader hiding out with Billy as he navigates the suburban home's hallways, closets, and rooms in a tight cat-and-mouse contest.

If you want traditional, small-town horror or a weak monster of the week, Nowhere to Hide isn't for you. Instead, this book exists for horror fans that crave a deeper level of psychological terror. Along with this offering, Capricorn Literary is reprinting classic horror novels, all smoothly presented in fantastic audio editions (or Kindle/paperback). Check out the publisher's other authors like Jeff Rovin, John Russo, and Allen Lee Harris.