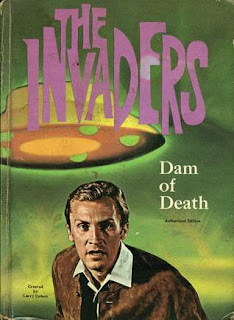 The first thing to know about Jack Pearl is that the name is a pseudonym of Jacques Bain Pearl. Pearl was born in Richmond Hill, New York in 1923. After obtaining his Master's at Columbia, Pearl spent nearly three years in the U.S. Army's Military Police throughout Africa, Sicily and Italy during World War 2.

After the war, Pearl began a short career as an engineer, but quickly his goal of becoming a full-time writer took control of his life. In 1952, Pearl was able to get his feet wet by writing for a short-lived crime-drama television show called Gang Busters. He also began contributing short stories to the Men's Adventure Magazines. His earliest short story may have been "Submerge!", published by Saga in September 1953. He would go on to contribute short stories to Man, Climax, Impact and Boys Life. After a stint as an advertising copywriter, Pearl worked his way into a managing editor role at Saga and Climax.

In 1961, Pearl began writing military non-fiction novels. The first was simply called General Douglas MacArthur, a life story of the man published by Monarch, which was followed by Blood-and-Guts, a life story of General Patton also published by Monarch. These two books instantly became hot sellers and Pearl was off to the races as a full-time novelist. A year later he wrote another one about Navy legend Admiral Bull Halsey and Famous Aerial Dogfights of World War 2. 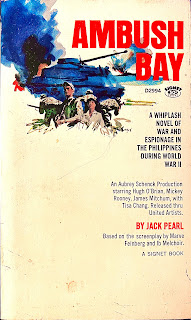 The earliest work I've read by Pearl is his 1962 movie novelization Ambush Bay. This was a film released by United Artists and Pearl mostly sticks to the film's screenplay but has a few variations. I read the novel and it's set during World War 2 in the Philippines. Nine battle-scarred U.S. Marines and an Air Force radio man are attempting to penetrate a Japanese occupied region to rescue a U.S. Intelligence officer. I really liked it a lot and reviewed the novel HERE.

In 1963, Pearl was still writing for magazines like Saga. In fact, Pearl started dabbling in Cryptozoology with some of his stories. 1964 proved to be a very productive year for the author. He wrote a non-fiction book called Battleground World War 1 as well as the movie novelization for Robin and the 7 Hoods. This was an all-star film showcasing Frank Sinatra, Dean Martin, Sammy Davis Jr., and Bing Crosby. That same year, Pearl rose to prominence with his book about historical assassinations called The Dangerous Assassins. In 1965, he also authored the movie novelizations for The Yellow Rolls-Royce and Our Man Flint, as well as a prison novel called Stockade, which was published by Pocket Books. 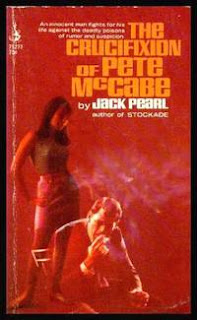 One of Pearl's most popular novels was published in 1966. It was called The Crucifixion of Pete McCabe and it is about a man convicted of rape and murder that must prove his innocence. In 1967, Pearl authored a television tie in novel to the sci-fi TV series The Invaders called Dam of Death. That same year he also authored the first of a two book series of young adult science fiction called Space Eagle, which is loosely based on the Lone Ranger concept. Also in 1967, Pearl authored two books as television tie-in novels to the show Garrison's Guerillas. One was a young adult novel called Garrison's Guerillas and the Fear Formula. The other was simply titled Garrison's Guerillas, a paperback published by Dell that serves as a traditional WW2 men's action-adventure novel. I read and reviewed the book HERE.

In 1968, Pearl authored the movie novelization of Funny Girl. By the 1970s, Jack Pearl started to author books in a gritty, more violent tone that fits snugly with men's action-adventure of the time. This era of his writing begins with 1971's A Time to Kill, A Time to Die. It's about a reunion of old friends from World War 2 at an Aspen Ski Lodge. But within a half-hour, five are fatally shot by a sniper and it's up to the local police and a psychiatrist to close in on the killer and learn his/her motives. His 1973 book Victims is about a terrorist bombing attempt in New York City on Christmas Eve. 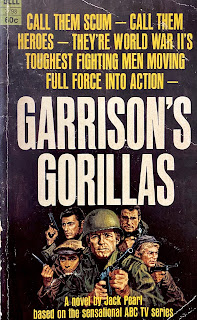 Pearl wrote The Plot to Kill the President in 1972 and it was published by Pinnacle. This is a book that was inspired by the Kennedy Assassination. Pearl continued doing television and movie novelizations in the 1970s with a book called Nancy, a mob-themed one called Lepke. He also started tinkering with romance novels in the 1970s with books like Callie Knight.

Real life Newark Detective David Toma co-authored a handful of novels with Pearl based on his career in law enforcement. The first was co-written with Michael Brett (the same one that wrote Diecast) and two were written with Jack Pearl – The Affair of the Unhappy Hooker and also The Airport Affair.

From 1977 through the late 1980s, Pearl teamed up with his cousin Donald Bain (author of the Murder, She Wrote series) to write mass-market romance novels under the name Stephanie Blake. This is what Pearl finished his career doing. He would pass away in Nassau County, New York in 1992.

You can check out our Jack Pearl page HERE as well as listen to our podcast episode about the author HERE.