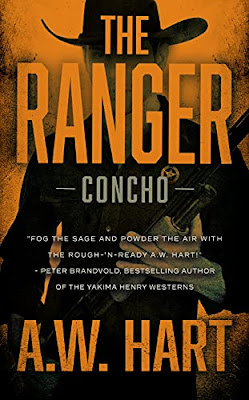 According to Wikipedia, Charles Gramlich teaches psychology at Xavier University. Born in 1958, Gramlich grew up in the foothills of the Ozark Mountains. His first published novels were in the late 1990s, with his influences ranging from Edgar Rice Burroughs to Louis L'Amour. Gramlich has authored fantasy titles like Swords of Talera and Wings Over Telera. In addition to writing in genres like sci-fi, mystery, and romance, Gramlich used Wolfpack Publishing's house name A.W. Hart to author an ongoing modern western series called Concho. My first experience with the author and the series is the debut, The Ranger.

The series stars Concho Ten-Wolves, a 6'-4” former Army Ranger that now works the Rio Grande border as a Texas Ranger. His heritage is African-American and Kickapoo Native-American. He lives on the Kickapoo reservation and has an on again, off again relationship with a woman named Maria. His uncle Meskwaa is the stereotypical funny guy and there's also a rat snake named Maggie.

As the novel begins, Concho receives a call for law-enforcement assistance at the local shopping mall. Inside, members of a terrorist group called The Aryan Brotherhood have executed five people and taken numerous hostages. With no back-up force, Concho takes his two handguns, a 30-06 rifle and a bow and arrow into the mall to make the save. In an exciting battle, Concho kills a number of terrorists with random weapons and ultimately becomes the hero.

After a verbal beat-down, Concho is relieved of his duty for a week, but not suspended. But, he is retained by the local sheriff's office when two bodies are discovered. One of the men is the Chief of the Tribal Police and the other has a distant relationship with Concho. Through flashbacks, readers gain an introspective understanding of Concho's upbringing, his military service, and glimpses of a failed relationship with his biological father. These elements help define the character and make for an interesting “open-book” concept that should propel the series.

Concho's investigation into the two deaths leads him into conflict with the reservation, the casino's criminal network, and ties to a Native-American gang called The Bloods. The murder mystery leads into some deadly territory where Concho finds himself a target. After surviving house fires, car accidents, and flying bullets, the Texas Ranger finds himself forced to solve the crime or literally die trying.

The Ranger is laced with over-the-top, unbelievable action sequences that should cater to fans of 80s action films. You have to suspend your disbelief and just accept that this fictional hero can accomplish anything. His NFL linebacker frame adds credence to the fact that he can receive, and dish out, physical punishment. In some ways, the book reads like a Dirty Harry paperback by Leslie Alan Horvitz and Ric Meyers (house name Dane Hartman). The hero rides tall, shoots straight, and speaks the truth – a modern day cowboy trapped in the present.

As a series opener, there's plenty of potential to make this character a little more dynamic or, even fragile. If you like contemporary westerns, then Concho may be your next read.