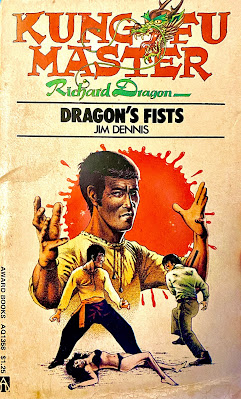 There's an interesting backstory behind the vintage paperback Dragon's Fists. It was published in 1974 by Award Books, a subsidiary of Universal Publishing under the pseudonym Jim Dennis. The novel was actually written by Dennis O'Neil and James Berry. O'Neil was a prolific comic book writer with works including Green Lantern, Amazing Spider-Man, Batman, and X-Men. Berry was a comic strip artist associated with the long-running Berry's World.

The 1970s provided a fertile landscape for men's action-adventure paperbacks, so the proposal was for Dragon's Fists to become a series. The title page inside states #1 and the book is a clear origin story. It was designed to propel Kung-Fu master Richard Dragon, the book's main character, into a long-running publication. Unfortunately, the book wasn't a success and Award Books canceled the series. Was the novel that bad?

Through numerous flashbacks, readers learn that Richard Dragon's parents were very wealthy. Dragon, in defiance, wasted his childhood by creating a lot of chaos for himself and the family. He was kicked out of numerous schools and universities and refused to conform to his father's rules. As a young adult, Dragon became a thief in Japan and attempted to rob an older gentleman. The man ridicules Dragon, but finds that he has the ability to do good things if he can change his attitude. This man, referred to as O-Sensei, is a Kung-Fu master. He teaches Dragon martial arts and how to live life in a positive way.

With his new skills, Dragon joins an espionage agency called G.O.O.D. (Global Organization of Organized Defense) and serves as an agent for a number of years. After he leaves the agency, Dragon becomes a martial arts teacher. In the opening pages, Dragon's friend Carolyn comes to him to ask for help. In a quick fight scene, Carolyn is kidnapped by a male villain named The Swiss. He also murders Carolyn's uncle in a quest to locate a series of numbers.

The bulk of the narrative is spent with Dragon trying to locate The Swiss in Paris. There's a number of violent fight scenes to keep readers engaged, but the story is fragmented due to the flashback sequences. It reminded me of the old Kung-Fu television show where the main character finds conflict and is reminded of some important lesson he learned from his master. The action is great, the story is convoluted, and the pace is jarring. Beyond collectible nostalgia, there probably isn't a reason to hunt this book down.