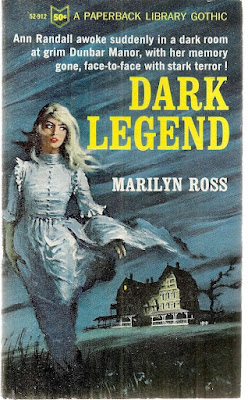 With nearly 300 novels, Canadian native William Edward Daniel Ross is probably the most prolific gothic writer of all-time. He wrote multiple series titles under a variety of pseudonyms as well as contributing to the paperback canon of Dark Shadows television tie-ins. I've read a few of his Marilyn Ross penned gothics and find them average at best. With a lot of driving time, I decided to listen to Ross's 1966 gothic title Dark Legend. It was originally published by Paperback Library and exists as an audio download from Paperback Classics.

The story takes place in the late 1800s in a large lakeside mansion in Maine.  Protagonist Jan wakes up in a bedroom with one of the most common soap opera tropes – amnesia. She doesn't know who she is or any prior events that have placed her in this enormous mansion. Thankfully, a man she doesn't recall comforts her and explains he is her fiance and that they had a train wreck on the way from Virginia to Maine. Further, she is introduced to her cousin, aunt, former childhood nanny, and the town doctor.

After the splendid bedside manner, Jan learns a lot about herself. She's filthy rich after inheriting her grandfather's fortune. She also learns that the neighbor is a crazy psycho that keeps vicious howling hounds patrolling his manor. Further, it's revealed that her mother was murdered by a man wearing black gloves and her father committed suicide. Because of all of this, there's supposedly a masked man wearing black gloves that haunts the mansion. Oh, and there's a summer cottage nearby that Jan is warned of. Apparently, it hosted some sort of heinous act that the family is now distancing itself from.

Dark Legend is better suited as a romance novel with a sprinkling of gothic suspense. The narrative mostly consists of Jan deciding if she wants to remain engaged despite the fact she knows nothing about her fiance. She's also attracted to the dashing town doctor and jealous of her cousin's relationship with both men. Ross spends a great deal of time on building these romance angles or having the characters organize a massive ballroom dance. There's wardrobes, guest lists and food to prepare and it stomps the brakes on any propulsive plot developments.

There is a hint of suspense when Jan is attacked by the hooded killer repeatedly. There's some mystery surrounding the death of her mother and the weird neighbor next door to flesh out the story. None of it can really save the tired storyline though. Ross is literally just cutting and pasting these plots – estranged granddaughter with dead parents, that inherits a haunted mansion, but must contend with a bitter family member while sparking a relationship with a handsome male. Ross' inability to create unique stories makes me appreciate authors like Jon Messman (writing as Claudette Nicole) and Michael Avallone (writing as Edwina Noone). Your mileage may vary.