A Taste for Sin 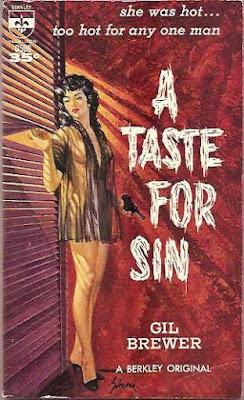 Gil Brewer (1922-1983) was a prolific author of paperback original crime novels in the mid-20th century before his life was consumed with alcohol and personal demons. He was at the top of his game in 1961 when he wrote A Taste for Sin, a novel that’s been reprinted by Stark House Press.

Phalen is not a good and honorable person either. He rents a room in a dilapidated lodge with a toilet that barely functions, and he can barely afford those spartan accommodations on his meager salary. He recounts his brutally-violent past, and, man, it’s something else. Brace yourself for some insane violence throughout this book. Anyway, it’s clear that Phalen’s intention is to somehow leverage the rich, married lady he’s banging to change the direction of his life.

Meanwhile, Phalen is dealing with the fallout of a petty crime he committed that spun out of control. He needs to be deceptively clever to avoid getting caught. Felice learns about Phalen’s money troubles and pressures him into a scheme to rip off the bank and kill her husband.

What we have here is a femme fatale heist novel and a rather excellent one at that. A Taste for Sin showcases some of the best actual prose writing I’ve ever read from Brewer. The sex scenes are more graphic than usual for 1961, and the action scenes are a genuine bloodbath. I’ve always cited The Vengeful Virgin and 13 French Street as Brewer’s masterworks, but A Taste For Sin is the new top-of-the-heap. Highest recommendation.