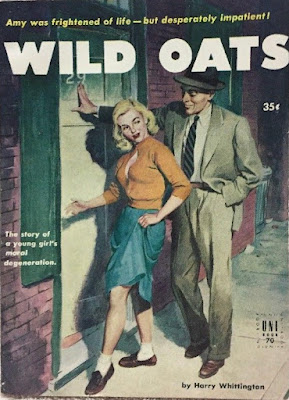 Florida’s King-of-Paperbacks Harry Whittington (1915-1989) had four paperback original novels published in 1954. One of those included a juvenile delinquent book called Wild Oats that promised “The story of a young girl’s moral degradation.”  The novel was originally published by Uni Books and is now available as a reprint from Armchair Fiction.

Amy has a troubled background. Her father left her mother for another woman and moved to Tampa, leaving his wife and Amy behind. As the novel opens, 15 year-old Amy is hitchhiking to Tampa to be with her estranged dad. She lands a ride with a creepy trucker who tries to rape her until a trooper intervenes and sends her back home to mom.

Both Amy and her mom are relatively new residents in the small Florida town of Duval, a sleepy hamlet divided into a caste system with a distinct class-based pecking order. Amy and her divorced mother are toward the bottom, but Mama is hell-bent on some social climbing. Her bright idea is for Amy to befriend the high school’s Alpha-girl, a bitchy teen named Clarice.

Amy quickly befriends the wealthy Clarice and begins to slide into delinquency - booze, cutting school, and pressure to engage in sexual activity as an initiation into Clarice’s No Virgins girl gang. The sex stuff is all off-page and more repugnant than titillating. On the other side of this teen malfeasance is a nice high school boy who thinks Amy is just swell.

I kept waiting for something interesting or edgy to happen, but the whole thing felt like an After School Special about the dangers of peer pressure. At best, Wild Oats is an interesting artifact from the juvenile delinquent paperback fad. However, the novel is beneath both Harry Whittington and you. Don’t bother.