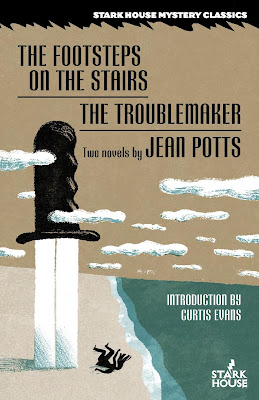 Author Jean Potts (1910-1999) graduated from Nebraska Wesleyan University in 1936. By 1940, Jean had moved to New York City, where she resided the rest of her life. With her newspaper experience in writing and editing, Potts eventually began contributing short stories to mainstream magazines like Woman's Day and Collier's. Her first book, Someone to Remember, was published in 1943, the first of 15 original mystery and crime-fiction novels. Along with winning a prestigious Edgar Award in 1954, Potts contributed to high-profile mystery magazines like Ellery Queen and Alfred Hitchcock. Beginning in 2019, Stark House Press began reprinting many of Potts novels in two-in-one volumes under their Stark House Mystery Classics imprint. My first experience with the author is her 1972 mystery novel The Troublemaker. It has been collected along with her 1966 novel Footsteps on the Stairs as the newest reprint by Stark House.

Quentin Leonard, finding himself unemployed, explains to his wife Grace that he needs to get away for a little while and spend some time finding himself in the northeast. After deceptively packing for a mini-vacation to New Hampshire, Quentin picks up his lover Lisa and the two of them head to the coastline of Maine. After their car breaks down, they agree to work for the Seaview Inn, a cozy little retreat for tourists wanting to explore the rocky shoreline.

The two lovers quickly realize there is no real plan other than working the summer away in this picturesque little town. Complicating matters is that Quentin finds a handwritten letter addressed to Lisa from her former lover, a mentally unhinged man named Carlos. Quentin knows Carlos has found them, but he isn't sure if Lisa is more willing to love an older, married man like himself or a former suicide patient in Carlos. It seems that both paths will eventually lead Lisa to future heartache and ruin. But, she never makes it that far. Her dead body is found the next morning on the rocks.

Potts places numerous characters at the proverbial crossroads. Who has tipped the scale to plunge into this jealous, homicidal rage? The obligatory suspects are Quentin, Carlos, and Grace, a trio of scorned lovers that all have motives for killing off sexy Lisa. What's really odd is that Potts injects some additional characters to create a denser narrative. Carlos' mother arrives in town prior to the murder and there is a guest named Margaret that just happens to have a broken car around the same time period as the murder. There's also the innkeepers themselves. But, the most surprising protagonist is a bird watching boy sleuth named Emerson. Aligning with Quentin, this young amateur detective is determined to find the killer.

The writing in The Troublemaker is propulsive enough to keep the pages flipping fairly quickly. It's a short read and contains enough mounting evidence to keep readers interested. I'm just not sure if this 1972 mystery novel is totally that original. If you are familiar enough with suspense thrillers, or Lifetime movies, the narrative is simply connecting the dots. The grand reveal comes within the last few paragraphs, but it's a sudden conclusion. I wanted a little backstory on the murder and what prompted such erratic behavior. But, overall, I'm not disappointed. It was an entertaining read.

If you enjoy the classic, traditional murder mystery, then surely you will be pleased with Jean Pott's The Troublemaker.