The University #01 - Sympathy for the Devil 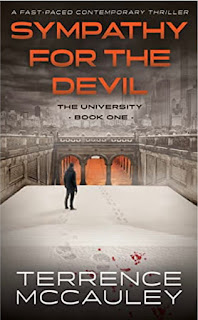 Sympathy for the Devil is the first in the series of espionage novels by contemporary New York author Terrence McCauley. The novel was originally released in 2015 but has found new life as the inaugural release by Wolfpack Publishing’s newly-acquired imprint Rough Edges Press.

The novel stars spy James Hicks (not his real name). He’s employed by an odd organization informally known as The University. It was created by an executive order during the Eisenhower Administration to operate outside the official intelligence community to protect the USA without federal (or ethical) oversight or funding.

The University gains its power through the recruitment of high-value “Assets” — people with secrets to hide that the agency blackmails into providing expertise, information and resources. Hicks recruits these reluctant assets with information gleaned from The University’s futuristic data analytics computer called OMNI. More on that later.

The day-to-day work of The University is to embed its agents inside suspected terrorist groups with the hopes of preventing acts of terror before they happen. Hicks runs The University’s New York office and oversees these operations. For this series debut, Hicks is dealing with a group of radical Islamic Somalis operating out of a Long Island taxi stand. Somehow the Somalis figured out that they were under investigation, and they stage an ambush targeting Hicks and killing a well-placed undercover operative.

There’s a lot of world-building to give the reader a feel for the intel environment in which The University operates. Nearly the entire first half of the novel is Hicks setting the stage, recruiting help and gathering resources for the mission at-hand. In the novel’s second half, Hicks employs technology, informants, enhanced interrogation and gunplay to investigate the bad actors behind the Somali cell.

My biggest criticism is the author's over-reliance on the agency’s OMNI computer system. The system is all-knowing, all-seeing and completely unrealistic — much like the one in the 1998 Tony Scott film Enemy of the State. The problem is that this trope robs the main characters of problem-solving within the plot. A digital, crystal ball like OMNI takes the story out of the world of hardboiled gritty realism and into the realm of paranoid sci-fi. The computer system also relegates Hicks to the sidelines and in front of a computer screen for much of the novel.

Despite these structural flaws, I mostly enjoyed riding along with Hicks on this adventure. The author is at his best when writing scenes filled with violent action, and there are several of these peppered throughout the paperback - mostly toward the end. When he leaves his laptop behind, Hicks is a great hero and the author is a fine writer.

While I didn’t love Sympathy for the Devil, I’m intrigued enough by the character and the agency to continue with the series. McCauley can write his ass off when he allows his action characters to do action stuff. Mostly, I trust the editorial hand of Wolfpack Press to shepherd this series in the right direction. For that reason, I’ll probably be back for more.