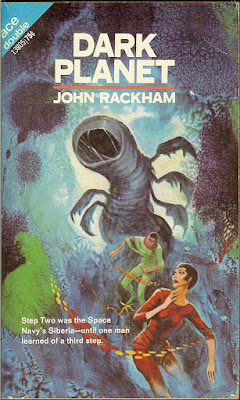 John Thomas Phillifent (1916-1976) used the pseudonym John Rackham to author a number of science-fiction and fantasy novels. Under his real name he also wrote three novels related to The Man from U.N.C.L.E. Along with 20 stand-alone novels, he also wrote two series titles, Space Puppet (1954-1955) and Chappie Jones (1960-1963). I recently acquired a crate of Ace Doubles that included a few novels under the Rackham name. Looking for adventure in a galaxy far, far away, I chose to read his 1971 novel Dark Planet.

In the future, war has enveloped the entire galaxy. Earth discovered an inhospitable planet deemed Step Two as a stopping point for vessels to re-supply and re-energize. The planet's atmosphere will eat materials like plastic and metal. Due to the acidic air, a specially designed dome was placed over a portion of the planet that functions as a military installation.

The book's protagonist, Query, has upended his military career and now finds himself doing labor as punishment on the planet of Step Two. Being a rebel at heart, Query continues to wander outside of the dome using a special space suit. In the opening pages, Query sees a figure in the distance and realizes the planet is inhabited by some sort of people.

Captain Evans and his daughter Christine arrive in Step Two and find Query. The war has escalated and their team needs an experienced ship mechanic, one of Query's many skills. The three of them fly out of the dome on an adventure to save the galaxy. But, the ship malfunctions and they free fall from 15-miles up, crash landing in Step Two's far-flung, unexplored reaches. Together, they must learn how to survive in an atmosphere that literally eats everything.

Unfortunately, there's not a lot that really happens in Dark Planet. Inevitably, the three find the bizarre people that live on the planet and they must learn from them how to survive and communicate. It's a fish out of water adventure, complete with giant worms and tree people. The hope that Rackham would write a stirring action novel was quickly dissolved by Query's romantic chemistry with one of the inhabiting females. If long conversations about the purpose of our existence is your thing, then this novel may entertain you. If not, turn the light off on Dark Planet.