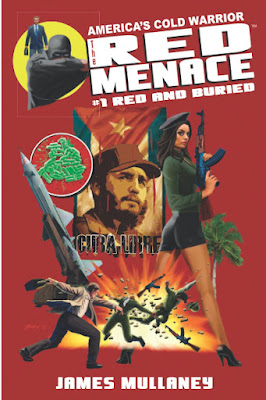 Author James Mullaney was born in Massachusetts and has an M&M addiction. To help feed his appetite, he's sold over a million books. Mullaney contributed to 26 installments of The Destroyer and wrote a six-issue arc for Marvel Comics' Iron Fist. In addition, he authors an ongoing series about a private investigator named Crag Baynon. My first experience with Mullaney is his espionage title The Red Menace. At the time of this review, there are a total of five installments. The debut, Red and Buried, was originally published by Moonstone Books in 2013. Bold Venture Press bought the rights to the first two novels and have released them as gorgeous trade paperbacks with Mark Maddox artwork. I've always enjoyed 1970s action-adventure, so I jumped right in.

In the 1950s, Patrick “Podge” Beckett donned a mask and cloak and became a U.S. secret agent named The Red Menace.  Beckett worked for the M.I.C. (Manpower and Intelligence Coordination), a short-lived bureau that was a melting pot of information gained from the C.I.A., F.B.I., Army Intelligence, and other domestic and international espionage and police agencies. By the late 1960s, invisible walls had been structured and these bureaus no longer actively (or voluntarily) coordinated with each other, instead hoarding the intelligence within their own departments. Thus, the M.I.C. slowly became obsolete.

Red and Buried begins with a prologue set in October, 1958. The Red Menace is in the Soviet Union stopping the plans of Motherland (Russian agency similar to the KGB) to create a biological weapon. Red Menace's chief rival is the Soviet's Colonel Ivan Strankov, the director of Motherland. By the end of the exciting prologue, Red Menace has won the battle and issued a threat to Strankov – don't ever come close to America again...or you'll be dead.

The first chapter brings the narrative into the present day of July, 1972. Readers learn that after his departure from M.I.C., Patrick Beckett started a lucrative and successful security consulting firm. His days as Red Menace are a distant memory. Beckett now lives a comfortable, luxurious life at the beach. A young man arrives and introduces himself as Simon Kirk, the son of Beckett's old boss at M.I.C. Kirk is now running the department and explains that Beckett's old ally and friend has been killed by the Soviets in Cuba. He was on an assignment there working under the disguise of a fisherman when he located a hidden missile range. Kirk knows he can't get into Cuba, but he can possibly pitch a deal to Beckett. Here's the setup:

Beckett will take on an assignment for the M.I.C. and figure out what's going on in Cuba. But, he needs to be invited there personally. Kirk knows Beckett declines business opportunities from any Communist country. But, he suggests that Beckett propose a security consultation with a dictator in Uganda. After setting up security forces for Uganda, that nation will spread the word that Beckett has finally placed money before his personal ethics. Then, Fidel Castro's people will invite Beckett into Cuba to analyze their security measures. Once he is there, Beckett will have free reign to snoop around and find the missiles. Or, Castro will personally invite him to the launch pad to consult with the Soviets.

All of this may seem convoluted, but it is rather simple. Mullaney places pure enjoyment and humor over technical nuances about 1970s weaponry. In doing so, he makes Red and Buried such a pleasure to read. Beckett's partner is Dr. Thaddeus Wainwright, a hilarious character that is sarcastic and intelligent. The pairing is similar to The Destroyer's Remo Williams and Chiun, an obvious influence on Mullaney's writing style and concept. The narrative is propelled by laugh-out-loud moments with Wainwright frequently ridiculing Fidel Castro's dictatorship. In terms of action, it's almost nonstop once the story gets rolling. Even in the slower parts, there are flashback sequences pertaining to Strankov's rise in the Soviet Union as well as prior Red Menace adventures.

If you love modern pulp, then The Red Menace is a mandatory series for you to read. It's fresh, remarkably well-written, and incredibly entertaining. I can't wait to see where the series goes next. Highly recommended!