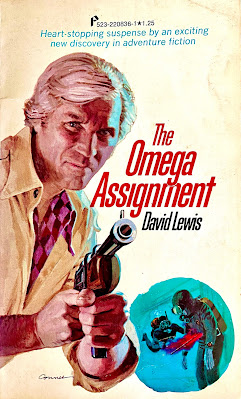 David Lewis, real name Patton D. Lewis, authored a two book series of spy novels for Pinnacle in 1976. In my research, I couldn't locate anything about Lewis other than a lot of Google hits on the western writer Lewis B. Patten. The series stars part-time British Secret Intelligence Agent Steve Savage. The first novel is The Andromeda Assignment and the follow-up is The Omega Assignment. In working backwards, I'm reading and reviewing The Omega Assignment.

Savage's origin tale, printed on the back of each novel, advises readers that he joined a freighter at the age of 14. He was later degraded by the Captain and beaten for six straight weeks. He managed to escape into Hong Kong and learned martial arts in exchange for cleaning a gym. He then returned to London and trained as a photographer. He has covered war and fighting throughout the world, including Vietnam, the Middle East and Belfast. His agent, Gregor de Freitas, operates as an SIS frontman after escaping the Soviet Union. Savage's capabilities to enter communist countries as a photographer allows him to work part-time as a secret agent under Freitas' guidance. Lewis warns readers that “This man is dangerous!”

In The Omega Assignment, a multi-millionaire German man named Braeder frequently entertains politicians and members of NATO on an ocean liner called Clytherea. On board, Braeder provides sadistic thrills that includes various types of sex, S&M, rape, and torture. Braeder “liberates” these sick leaders and allows them to engage in their wildest fantasies. But, he records all of this on video tape in an elaborate ruse. Here's how it works:

Braeder sinks Clytherea and uses the recorded tape as blackmail to obtain a small hydrogen bomb that fits into a suitcase. He then trades this bomb to Middle East fanatics for an extremely large supply of heroin. He then makes connections with the largest mafia families in America to become their chief supplier. With a surplus of heroin, he slowly begins to reduce the supply to the mob. To free up the supply chain, Braeder demands more money for the drug. Thus, Braeder begins raking in the dough and makes himself...king of the world?

While I don't know exactly what Braeder hopes to accomplish with all of his money, the narrative outlining all of this was a real pleasure to read. Savage becomes involved as an underwater photographer gaining footage exploring the sunken Clytherea. Lewis writes the underwater exploration portion so well. He thrusts the reader into these gloomy, dark hallways and rooms as Savage explores the ship. There are floating corpses and a plethora of art and jewels to photograph, but Savage is placed in peril when his diving partner is killed by a booby trap inside the ship.

Without ruining the fun, Savage teams up with an American female narcotics agent named Destiny, while assisting the CIA and British intelligence. The explosive narrative has Savage facing a variety of criminals on land, air and sea. Most of the plot develops in Cyprus and culminates in Destiny being captured and taken to Braeder's enormous beach-side fortress. Savage purposefully becomes captured in an effort to free her from the inside. He also teams up with an older Greek paramilitary unit known as EOKA for the finale.

I felt that the first two acts of The Omega Assignment was a lot of fun and read like a B version of a Jack Higgins novel. The last act was really over the top with Savage forced to fight in the nude gladiator style against Braeder's “strong guy.” I thought that this final battle was more like a Richard Blade adventure complete with zany antics that made the conclusion a bit cartoonish. If you love action-packed adventure and espionage, then The Omega Assignment is an entertaining read. I liked it enough to search for the first book online. To my knowledge, these books have never been reprinted, but remain fairly affordable as used paperbacks.

Note: Thanks to Spy, Guys, and Gals for additional information about this series.