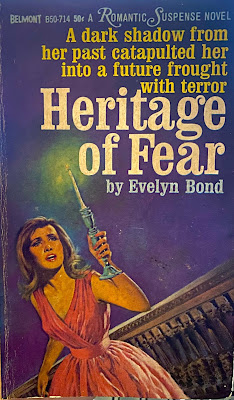 NYU graduate Morris Hershman (b. 1926) authors gothic, romance and western titles under the pseudonyms Evelyn Bond, Arnold English, Sara Roffman, Janet Templeton, Sam Victor, Lionel Webb, and Jess Wilcox. He is a member of the Mystery Writers of America and his papers are stored at Bowling Green State University. My experience with the author is his 1960s and 1970s gothic paperbacks published by the likes of Belmont, Lancer, and Avon under the Evelyn Bond name. In the mood for a cozy mansion thriller, I tried Hershman's 1966 Belmont novel Heritage of Fear.

Set in 1874, the book stars a young American woman named Karen who has recently married the wealthy British businessman Hugh Locke. On a train ride to Hugh's enormous Locke Hall home, Karen bumps into a man who has some knowledge about her new family. Hugh's father had been married twice before and experienced the death of his first wife when she was just a bride. The second wife nearly died in a horse riding accident before finally perishing giving birth to Hugh. This stranger provides an ominous warning. Demanding an explanation, Karen prods Hugh into revealing the origin of the warning. Hugh explains that Locke Hall is connected to ridiculous folklore that any bride brought to the home will die.

Needless to say, Karen experiences some frightening things inside her new mansion. First, she is nearly killed when a large painting falls on her. Second, she is spooked by the “ghost” of a woman dressed in a wedding gown with her throat savagely sliced. After the wedded couple host both the family attorney and Karen's father, a murder occurs pitting everyone against each other. Is their a murderous ghost on a homicidal rampage or did one of these four people commit murder?

Hershman's narrative plays out like a suspenseful whodunit with an abstract locked room mystery. The idea of the gruesome ghost was scary at times, but at this point I'm a seasoned gothic pro and I know how these supernatural entities eventually morph into vengeful ex-lovers, greedy family members or jaded employees. I won't ruin the surprise because there is a small chance that this could be your first gothic read (out of the 2,500 unique titles that were probably published). Hershman is a capable writer that I enjoyed and I felt he made the most out of this tired storyline.